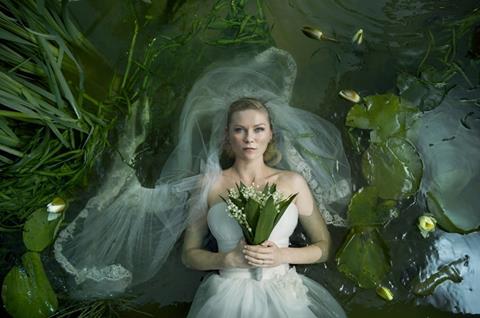 The end of the world is nigh in Danish maverick Lars Von Trier’s long-awaited psychological disaster movie - and for all the film’s command of dark fairy-tale atmosphere it’s such a long and sluggish haul that many in the audience will find themselves cheering on the apocalypse. An authoritative performance by Kirsten Dunst (probably her best yet), a magnificent Wagnerian soundtrack, and effective use of the film’s otherworldly country-house location cannot disguise the fact that this is one of Von Trier’s most dramatically flaccid films to date.

The film’s opening pre-title section is a standalone tone-poem, accompanied by the soaring, romantic Wagnerian orchestral theme that will recur throughout.

For all the film’s widescreen panache, the script at the heart of the exercise feels like an uncooked avant-garde play. And yet some power remains nevertheless, as it did with Antichrist: Von Trier has become a stager of fears and anxieties, a sort of psychic circus master, and despite its faults, Melancholia lodges in the mind like a scary fable told by a strange uncle.

Pre-sold by Trust Nordisk to a raft of territories, with Magnolia releasing in the US, Melancholia will split the critics pretty much everywhere it opens, but it’s enough of an event to attract a wide arthouse crowd. It also has none of the horror turn-off (or turn-on) problems of Antichrist; there are even some laughs along the way this time round.

The film’s opening pre-title section is a standalone tone-poem, accompanied by the soaring, romantic Wagnerian orchestral theme (from the prelude to Tristan and Isolde) that will recur throughout. For eight minutes we are presented with a series of captivating symbolic tableaux shot with dreamlike clarity: birds falling dead from the sky around an expressionless Kirsten Dunst; Charlotte Gainsbourg trudging with a young boy in her arms through grass on a golf course that seems to have turned to quicksand, and other doom-laden augurs, which culminate in a magnificently visualised planetary collision.

Then it’s into the first of two narrative sections, which follows newly-wed Justine (Dunst) on her way from wedding to reception with her devoted new husband Michael (Alexander Skaarsgard). As they arrive at the historic country house hotel that belongs to Justine’s sister Claire (Gainsbourg) and her rich, irascible husband John (Sutherland), we begin to realise that not all is well with the new bride.

Though it’s never explicitly stated, her forced smiles and compulsion to wander away from the crowd - and her husband - make it clear that she’s suffering from depression, or melancholia. She gets little help from her parents - amiable flaneur father Dexter (Hurt) and bitter, misanthropic mother Gaby (Rampling), or from her manipulative advertising agency boss Jack (Stellen Skaarsgard), so it’s left to an increasingly irritated Claire to try to keep Justine on an even keel, and the wedding reception on track.

But Justine’s inner darkness overcomes her, and even Michael is pushed to abandon his new bride - though quite why this apparently patient and loving man would not stand by his woman is just one of several plot cruxes that we are simply forced to accept.

Part two, ‘Claire’, focuses on the more ostensibly together of the two sisters, but also fast-forwards the action some days (or weeks?). The arrival of an unknown ‘planet’ had been touched on allusively in the prologue and the film’s first section, but here it becomes a reality, and is given a name: Melancholia.

The setting is the same country house hotel - owned and run by Claire and John, it seems - where Gaby returns, in a near catatonic state of depression. But gradually, as Melancholia’s trajectory puts it on a collision course with earth, it’s Claire who lets her fears overcome her, while Justine gradually lightens up, reaching a kind of serenity, and taking charge, as the world approaches meltdown.

The English dialogue is often stilted, for no good reason (“I’ve reached a conclusion in regard to the tagline” says Justine at one point). The director often seems to stifle his actors’ natural expression for his own mannerist ends - this is a film whose emotional heft lies as much in the musical soundtrack as in the performances.

And yet Melancholia’s imagining of a lonely, internalised apocalypse, experienced, in the end, only by Justine, Claire, Claire’s young son and the horses in the stables, in a big old country house isolated from the rest of the world, does build a weirdly memorable dreamscape, for all its faults of story, script and character.