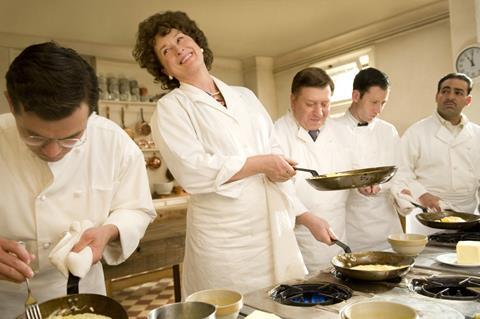 Meryl Streep picks up a record-breaking 16th Oscar nomination for her portrayal of Julia Child, the legendary TV chef credited with introducing French cookery to the US.

Written and directed by Nora Ephron, the film follows the parallel lives of Julia Child and New York blogger Julie Powell (played by Amy Adams) as she attempts to cook all of the recipes in Child’s mammoth Mastering The Art Of French Cooking.

“She came on television at a time when there weren’t that many women on television,” Streep says of Child. “She was like a pioneer — like Barbara Walters, one of the first that wasn’t an entertainer… She also came onto television when she was already 50. And so she was fully formed. You know, she was herself. Her personality indelibly sort of created, and not by anybody else, just by her own life experience and who she was.”

Child’s height was a key part of her character. “To be six-two, and her sister was six-feet four-inches tall, in the 40s was almost a handicap of a kind,” Streep explains. “It was very important in forming the person that she became, I think.”

Streep relished the chance to cook, something she says she’s usually too busy to do much of. “I could cook there at the studio,” she says. “They had a whole kitchen set up. And I could call it practising and it was my excuse.”