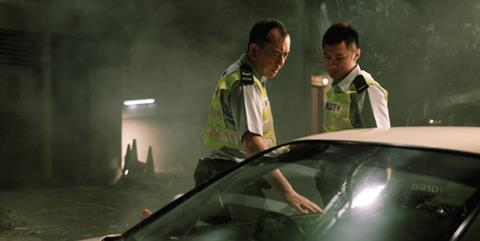 A slickly shot action-thriller that could benefit from the popularity of recent car chase films such as Drive and the Fast & Furious series, Motorway (Che sau) is a smart bit of full-throttle entertainment that could find an eager audience with a love of all things action and automotive.

Motorway is more about the fast cars, screeching tyres and throbbing engines…and there are plenty of loving shots of them to keep action-loving petrol-heads happy.

The film bears all the hallmarks of its producer Johnnie To – smooth kinetic action scenes; understated heroes and villains and stylish directorial moments – and while the story is pretty straightforward and predictable Motorway (not the most inspired of titles) delivers plenty of tyre-screeching moments and moves with plenty of high-octane energy.

Unlike Drive and Fast & Furious, this film eschews celebrating the criminal fraternity and sticks on the side of law-and-order as it follows the pairing of cops Lo Fung (veteran actor Anthony Wong), who is soon set to retire, and eager rookie Chan Cheung (a nicely determined Shawn Yue), who are part of Hong Kong police’s ‘Invisible Squad’, a unit that use fast cars (Audis in this case) to chase speedsters.

As is usually the case in such films, Lo Fung is counting the days till he retires, but he past comes back to haunt him when legendary getaway driver Jiang Xin (Guo Xiaodong) arrives back in Hong Kong. He arranges to get himself caught in a speed-trap so he can set in motion a plan to spring his old partner-in-crime Huang Zhong (Li Haitao) from jail.

Super-confident Cheung chases their getaway car, but is humiliated when Xin leads him into a tight alley and a turn so tight no driver should be able to get round it. Xin manages this incredible feat, which strikes a chord with Fung who recalls he came up against the same drivers many years before.

The third act – the film is based pretty much the old three-act structure – sees the Motorway switch into full-on action mode as the police intensity to catch the bad-guys is racked up (Zhong happily kills any police in his way). They are planning a jewellery heist, which nicely sets up the film for – in a novel twist – the main car chase to take part in a packed underground car park (which offers Cheung the chance to prove he has mastered the super-tight-turn trick that Xin uses as part of his escape plans) before heading out onto a blessedly empty motorway.

In many ways the film is more similar to Walter Hill’s 1978 classic Driver, though Soi Cheang’s direction, while slick, lacks a colour palette or vivid shooting style to set it alongside that film, or even recent retro-style hit Drive, directed by Nicolas Winding Refn. But the cop pairing of Anthony Wong and Shawn Yue works rather well.

The women characters are rather limited at best, with only Barbie Hsu making an impact as a pool-playing surgeon who is disdainful of Cheung’s driving skills, but in the end Motorway is more about the fast cars, screeching tyres and throbbing engines…and there are plenty of loving shots of them to keep action-loving petrol-heads happy.