Jerusalem kicks off with local crowd-pleaser 'The Unorthodox' 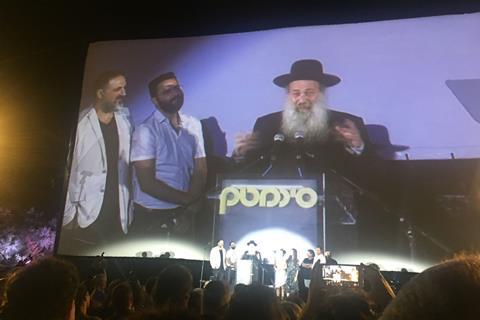 The 35th edition of the Jerusalem Film Festival (JFF) opened on Thursday evening (July 26) with Israeli director Eliran Malka’s debut feature The Unorthodox, exploring the events leading up to the birth of Israel’s controversial religious political party Shas in the 1980s.

Festival director Noa Regev and JFF artistic director Elad Samorzik’s decision to select a picture by a first-time director with a religious background was seen as bold move given the festival’s traditionally secular atmosphere, but it appears to be have paid off.

The fast-paced tragi-comedy, set against the backdrop of 1980s Jerusalem, struck a chord with the 5,000-strong audience gathered in the Sultan’s Pool amphitheatre in the shadow of the Old City, who laughed throughout and broke into enthusiastic applause at the end.

It is the first time a debut feature has opened JFF since its launch in 1984 and it is only the sixth time an Israeli production has been honoured with the prestigious gala screening slot.

“We’re always happy to open the festival with an Israeli film,” festival director Noa Regev told Screen ahead of the opening.

“We have 5,000 people in attendance on the opening night. Selecting the right opening film is quite a mission because we’re looking for a film which marks cinematic achievement on the one hand and on the other can appeal to different kinds of audiences.”

“The Unorthodox offers a great combination. It’s also a very Jerusalemite film. The story unfolds during municipal elections and the city is going through elections now, which makes the film even more relevant. At the same time, it’s a universal story about an individual who decides to change society and comes up against politics.”

Read more: The Orthodox director Eliran Malka on how he brings his religious values to the screen

The film marks the return of ultra-Orthodox actor and performer Shuli Rand to the big screen for the first time in 14 years since his lead role in Gidi Dar’s comedy Ushpizin, starring an all-Haredi cast. The actor took to the stage alongside Malka to thank the festival for believing in local talent.

Rand plays a forgotten figure who spearheaded the creation of the Shas party – which was created to champion the cause of the then downtrodden ultra-Orthodox community of Middle Eastern and North African descent – who was ousted from its ranks as it took off.

Contemporary politicians were absent from the opening night ceremony, however, apart from in a short video address in which figures such as controversial Culture Minister Miri Regev and Jerusalem mayor Nir Barkat talked of their love of cinema and their favourite film (Gone With The Wind for Barakat and Casablanca for Regev).

The festival has sought to avoid the politicisation of the opening event since the appointment of Regev, who has been deeply critical of the country’s left-leaning cinema world. Her appearance on the big screen on Thursday evening was met with loud jeers and boos.

Tributes were paid to Israeli distributor and producer Leon Edery and editor Era Lapid who died in the past year as well as late Shoah director Claude Lanzmann, who was at the festival last year with his penultimate work Napalm.

Israeli cinematographer Yaron Scharf, who shot The Unorthodox and is also a long-time collaborator with filmmaker Joseph Cedar, was handed a lifetime achievement award.

There will be plenty of politics in the festival’s programme of some 180 works which includes Dan Shadur’s documentary King Bibi, charting Israeli Prime Minister Benjamin Netanyahu’s rise to power; Sundance hit The Oslo Diaries by Mor Loushy and Daniel Sivan as well as the hard-hitting animated documentary Samouni Road, capturing a family trying to reconstruct its life in Gaza after the latest war.

International features screening include a slew of Cannes titles including Climax, Happy as Lazzaro, Girl and Dogman.

JFF’s 35th edition is kicking off two weeks later than its traditional mid-July slot this after the management team decided to shift the dates to avoid the event clashing with the World Cup and the Jewish Tisha B’Av day of remembrance.

Regev revealed, however, that she and her team are now mulling whether to keep the later dates, which she says work better with local audiences. She also points out that the fact the opening night coincides with the romantic Tu B’Av festival this year might help with ticket sales.

“I think people can get very busy in the period leading up to Tisha B’Av with personal commitments. Traditionally, the end of July has been a busier time for cinema that the start of the festival. No decision has been taken yet. We’ll take a decision after this edition.”

This year’s festival also kicks off just two months after US President Donald Trump carried out his pledge to move the US embassy to Jerusalem and recognise the city as the capital of Israel, in a move that violates international law and ignore the rights of Palestinians who also lay claim to the city.

International condemnation of this move as well as ongoing violence along Israel’s border with the Palestinian territory of Gaza – which has resulted in the deaths of more than 130 Palestinians since mid-May - appears to have dissuaded big A-list US guests from attending this year.