Inaugurated at last year’s Jerusalem Film Festival (JFF), Think Fest, Jerusalem’s platform to discuss the future of film festivals, was back for its second edition on Friday (July 27). 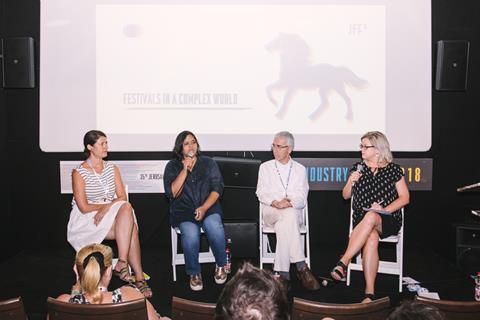 The 2018 event invited a cohort of professionals from international festivals across Europe, India and South America. Key to this year’s debate was the subject of how festivals can find their places amongst global upheaval and intense political climates, which moderator Wendy Mitchell (and Screen International contributing editor) noted was an appropriate topic to debate in the famously complex city of Jerusalem.

In the backdrop of Israeli culture minister Miri Regev’s controversial proposed changes to the country’s Film Law, Karin Rywkind Segal, artistic director of the Tel Aviv-based DocAviv festival, assured the audience that her event retained “complete creative and artistic freedom”. While DocAviv is government-funded and, said Rywkind Segal, they “need that money to survive”, she also emphasised that any attempted infringements on freedom of speech would make them “have to think about what they’re doing”. DocAviv has yet to suffer any form of government censorship, she noted, unlike its counterpart JFF which faced pressure in 2015 to remove documentary Beyond The Fear from its programme, with Miri Regev threatening to remove funding if the request was ignored.

Smriti Kiran, creative director of the Mumbai Film Festival, explained that in India, festivals are the only places where you can watch films “as the filmmaker intended” because the events have censor exemption. Elsewhere, all films released in cinemas are censored by a government regulatory body, which she noted was particularly firm on any sex-related content. While her festival doesn’t receive political pressure since it is privately funded, Kiran believes it could be beneficial for the government to become more active in the country’s film industry. “Filmmakers in India have no avenue of funding except for the National Film Development Corporation of India,” she said. “When you don’t have governed bodies actively trying to influence culture, it hobbles culture.”

Ahmet Boyacioglu, a Turkish director and festival organiser, highlighted that his country allows international films to play in festivals without certification, but dictates that any Turkish title must ask the ministry of culture for a certificate. However, he warned that filmmakers can use the idea of censorship to drum up interest in their film. Boyacioglu cited an incident at the 2015 Istanbul Film Festival, which saw a screening of a documentary about the Kurdistan Workers’ party cancelled after perceived government pressure. “The director refused to send the film to the ministry of culture and it was banned, it was a domino effect, it was not good for the reputation of the festival,” he explained. “Our ministry is clever enough not to censor anything because it becomes public and an advertisement for the filmmaker.”

Kiran added that festivals need to retain a principled approach to programming but should also be pragmatic. “Political awareness in programming is cardinal, but we have to be careful about what defiance we choose to put out there,” she said. “You don’t want to take on something that will completely shut you down.”

Lack of equal gender representation in festival programmes and staff was in the spotlight throughout Think Fest, with debate spring-boarding from Venice Film Festival director Alberto Barbera’s comments last week in which he defended the lack of female directors in his event’s competition. “You can’t change things from the outcome, they have to change from the start,” suggested Barbera in an interview with Screen following the Venice programme launch.

Rywkind Segal stated that DocAviv had achieved 50% women filmmakers or co-directors this year without introducing a quota or target. The event has a “good gender split” in its programming team, though it is widely recognised that female directors are more prevalent in the documentary sphere. Boyacioglu called on festival heads to seek creative solutions: “In Turkey, we have three women’s’ film festivals that never show any male directors’ films, that can be a solution.”

Kiran added that female representation is an issue for the wider film industry. “There needs to be a deeper analysis of why we don’t have the female workforce in key areas in film,” she said. Mumbai is currently working on a report with auditor firm PWC to analyse why there aren’t enough women in Hindi cinema, which she called a starting point: “We don’t know how deep the problem is.”