Sky Group CEO Jeremy Darroch has called for greater regulation of online giants such as Amazon and Netflix, which he says are posing the European pay TV service “enormous challenges”. 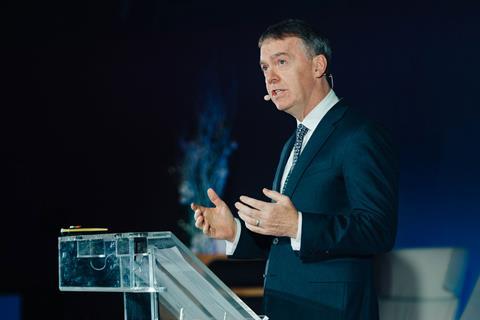 Darroch was delivering a keynote address during the Estonian EU Presidency Conference conference, which is being held this week at the Tallinn Black Nights Film Festival.

The executive started out by admitting that debate around Netflix and Amazon growth had been “coloured by a fear that the internet will destroy our business models…that’s not happening”.

However, he warned that digital giants are creating “enormous challenges” for Sky.

“When paying taxes becomes a competitive disadvantage, you know you have a problem,” he explained, referencing the fact that Sky paid €2bn in tax in 2016: “Competition is at risk if you have an uneven playing field.”

In October this year, the Financial Times reported that Netflix paid only €300,000 in tax in the UK in 2016, while the Guardian reported that Amazon was recently ordered by the European Union to pay back taxes of €250m in Luxembourg over “illegal tax advantages”. Both companies insist that they are complying with tax regulations.

Google and Facebook have also faced scrutiny over the amount of tax they pay in UK, which has led to the introduction of anti avoidance provisions (aka the ’Google Tax’) by the government.

Without referencing specific examples, Darroch added that some global internet platforms have become “a safe haven for illegal streams and downloads” and that many companies only take a “cursory responsibility for piracy”.

He suggested that there should be “a broad set of rules governing exploitation for IP [intellectual property] in the digital world”, calling for online regulation to come up to par with television regulation.

He added that European policy bodies should also be focusing more of their efforts on online safety.

“[Sky] is in millions of Europeans’ living rooms, we’re trusted to provide entertainment to different generations, and we do so safely,” he commented, “At a time where there are serious questions over the veracity, safety and legality of much of the content to be found on the internet, television remains the gold standard for responsibility.”

“Why is there the least regulation where there is the most danger for viewers?” Darroch asked, referring to the internet.

“The DSM [Digital Single Market] strategy is laudable, but now it’s time for a Digital Safety Strategy,” he said. “A race to the bottom is in no one’s interests.”

Darroch began his keynote by joking that British people have become “an endangered species” at European policy events following last summer’s Brexit referendum, in which the British public voted to leave the European Union.

He insisted that, following that vote, Sky remained “European in its outlook” and that its commitment to the continent was “as strong today as it has ever been” and will continue ”long after Brexit”.

Darroch used the platform to talk up the strength of the European film and TV industries and the potential for European audience growth. He highlighted that there are now more than 11,000 European TV channels and 3,000 on-demand services, which combined are worth more than €100bn and employ 1.2 million people.

Sky is a large part of that market, he said, with 23 million customers across seven countries, which he pointed out is a bigger European presence than Netflix.

Darroch emphasised that Sky is Europe’s largest single investor in content, spending €7bn on audiovisual content each year, the vast majority of which is European in origin.

Recent marquee investments for the corporation include German series Babylon Berlin – which is already the most popular series this year in Germany behind Game Of Thrones – Gomorrah, a major hit in Italy, and recent UK drama Riviera, which has been downloaded more than 20 million times.

At all times, Sky has 1000 hours of original content in production, and it currently has 250 shows in various production and development stages, said Darroch.

“The amount of content available to our customers would have been unimaginable a few years ago,” he added.

He also talked up the variety and scope of European-produced content, saying that “local content is the bedrock of our industry”.

That content is inspired by a ”variety of cultures and experiences from the various European nations”, he continued.

He conceded that deep-pocketed US SVOD companies are producing “fantastically high quality programmes” but also contended that there is a “necessary uniformity to their creativity even when produced outside the US” because the platforms serve a global customer base.

“We [Europeans] should be confident that our creativity is in demand,” he added, pointing out that series such as Gomorrah have been exported to more than 100 countries including the US.

“Balancing expensive series by selling them abroad is one of the reasons European TV has begun to conquer the world, which is why sacrificing territorial licenses as has been proposed, would be shooting ourselves in the foot,” he commented in reference to the DSM.

Amid the talk of monopolies, Sky’s own future as an independent company is currently uncertain while the Competition and Market Authority investigates 21st Century Fox’s proposed £11.7bn deal to buy the 61% of the company it does not already own.