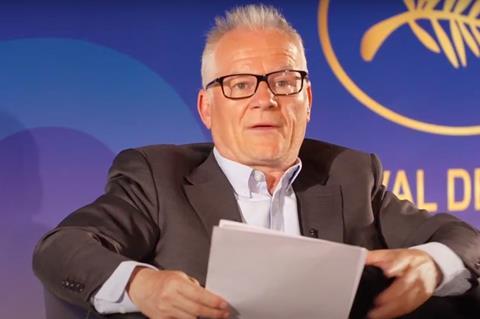 The Cannes Film Festival will unveil its Official Selection on May 27, five weeks before its planned physical edition kicks off on July 6. The date was confirmed by delegate general Thierry Frémaux in an interview with French radio station France Inter on Monday.

Frémaux voiced his “strong” confidence the 74th edition would take place as planned in July in spite of ongoing uncertainty over the trajectory of the Covid-19 pandemic.

“It’s time to speak about our confidence, if not certitude, that Cannes will take place in the month of July,” he said.

He suggested there was greater political will this year for the festival to go ahead than in 2020, when plans for an edition at the end of June, early July were ditched in mid-April and replaced with a 2020 ‘label’ and virtual Cannes market in June.

“Last year the president of the republic said we can’t do anything before the end of June. We looked at it and saw we could have gone ahead in July,” said Frémaux.

He also cited the rollout of vaccines, warmer weather and now entrenched social distancing protocols as other elements in favour of this year’s July edition, due to run July 6-17.

Frémaux also used the interview to announce that Leos Carax’s musical film Annette would be the opening film, at the same time as the press release was going out to media outlets in France and internationally.

Asked about the choice of Annette, he said: “[Leos Carax] is an auteur, an auteur who is absolutely revered in France and abroad and [it’s] with two world stars, one of whom is French, Marion [Cotillard] and it will be distributed by UGC, a French company, the theatres of which have been closed, there were lots of elements that converged,” he explained.

He added that if everything goes to plan and Cannes opens on July 6 as scheduled, UGC will release Annette in France to coincide with its Cannes world premiere, as is traditionally the case with all opening films at the festival. Cinema theatres have been shut in France since late October 2020 but are expected to reopen from May 26.

Frémaux’s bullish comments come amid widespread film industry talk around who is likely to attend Cannes this year if it does go ahead. While French professionals, and some Europeans, appear keen to show solidarity for the festival, there is less enthusiasm out of the US, Asia and Latin America so far.

Additionally, the Cannes Marche is hosting a five-day online pre-screenings event from June 21 - 25 that is expected to coincide with a virtual US agency-led event.

In another positive development for the festival over the weekend, however, president Emmanuel Macron announced on Sunday the country would start welcoming  international visitors back into the country from May onwards. He said that Americans would be widely allowed to enter the country for the first time in more than a year as long as they were in possession of vaccine passports.