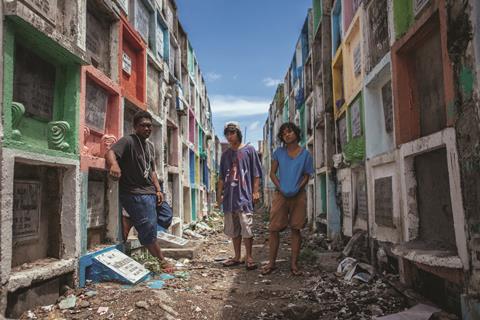 Treb Monteras II described how he used rap to talk about the Philippines’ martial law era and the current war on drugs in his recent festival hit Respeto. “The film is really about the unending cycle of violence in the Philippines – from the martial law era in the 1970s to the thousands killed since 2016 – history is repeating itself,” said Monteras, who made his feature debut with the film.

“But these are difficult messages to sell to the audience – so we marketed the film as if it were 8 Mile or Straight Outta Compton. You go in thinking it’s a hip-hop movie but realise by the end that it’s about much more than that.”

Indonesia’s Garin Nugroho, whose 2016 Chaotic Love Poems is also screening in Crosscut Asia, said music may be the best medium to evoke memories everywhere in the world, but has particular significance in Asian cinema.

“Asia has more of an oral tradition, rather than a written tradition like the West, and song is an essential part of that,” said Nugroho, whose last film Memories Of My Body, about a dancer in the Lengger tradition, premiered at Venice this year.

“So we use music to convey the history and emotions of the people – it’s important as a medium of expression,” Nugroho added. On the surface a romantic drama, Chaotic Love Poems portrays the social history of Indonesia in the 1970s and 1980s through a soundtrack of the pop music of the time.

Vietnam’s Nguyen Quang Dung said the music in his films also reflects the different waves of colonial influence in his country. His Crosscut Asia title, Go-Go Sisters, a remake of Korean studio CJ Entertainment’s Sunny, is set in 2000 but has flashbacks to the 1970s.

“In the Chinese colonial era, Vietnam was influenced by Chinese music, then it was French music, and then it was the turn of the US. Especially in the ‘70s we were strongly influenced by the music and lifestyle of the US hippy culture that was imported into our country.”

Dung added that after Vietnam became a socialist country in 1975, music was mostly used as a propaganda tool. “But after sanctions were lifted in the mid-90s, all the old pop songs were revived. We can say that from 2000 onwards, Vietnamese music experienced a golden age.”

Nugroho explained how Indonesia was mostly influenced by European music and Middle Eastern musical theatre before the Second World War. “Then after WWII, the US became champion of the world and we were influenced more by American music. Our Krongcong music has a strong influence from Hawaiian culture that was very popular in the early part of the 20th Century.”

Monteras talked about how the Philippines’ own version of hip-hop now draws millions of views on social media. “Its inspired by American culture, but we’re making it our own – Filipino rap is more about the lyrics and not the beats.”