Universal achieves biggest ever year for any distributor in UK as it leads the market, with Disney close behind. 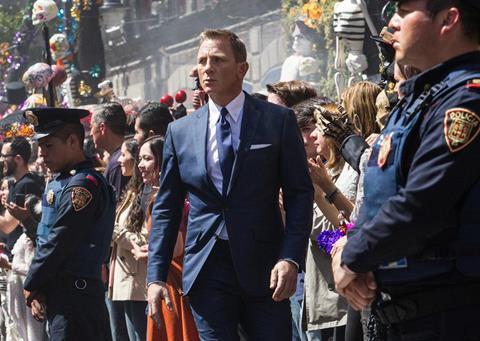 Scroll down for top ten films/distributors

Propelled by mega hits in the form of Spectre and Star Wars: The Force Awakens, the UK box office recorded its highest-grossing year ever in 2015.

All regions saw notable rises on 2014, with England posting the biggest increase at 18%. Scotland and Wales boosted 12% and 10%, respectively, while Northern Ireland and the Republic of Ireland both rose 5% (when viewing in local currency).

“In our preview review of the disappointing 2014 box office, we stated that cinema is a product-driven market. The audience will turn out for the films that grab their attention but they need a compelling reason to go,” stated Lucy Jones, executive director at Rentrak.

“This was emphatically proven by the record-breaking results seen in 2015 which delivered not only the biggest box office total of all time, but also Star Wars: The Force Awakens, now poised to take the crown for the biggest film of all time.” In addition, it’s encouraging to see the success of local films and actors, with four UK productions passing £20m for the first time since 2011.”

December admissions have yet to be confirmed, but admissions for 2015 as a whole are guaranteed to be up on 2014. including November the year to date was 153.4m which is 9.3% ahead of 2014 at the same stage.

Officially, Sony’s Spectre ended the year as the biggest hit of the calendar year with $137.5m (£94m) as it became the third biggest film of all time, but Disney’s Star Wars: The Force Awakens has since overtaken it and will become the biggest-ever film in the UK by this coming weekend.

Despite this, it wasn’t Sony or Disney leading the market in 2015. That honour went to Universal who posted the biggest-ever year for any distributor with a mammoth $409.6m (£279.93m), accounting for 21.37% of the overall market.

Four of Universal’s releases took a place in the top ten films of the year. Fifty Shades of Grey became the biggest-ever 18-rated film of all time with $51.4m (£35.1m), but the distributor’s highest-grossing title was Jurassic World with a roaring $94.4m (£64.5m).

The distributor had a further two titles in the top ten of the year: Avengers: Age of Ultron with $70.7m (£48.3m) and Inside Out which became the second highest-grossing original animation of all time with $57.3m (£39.2m).

As with last year, it was a homegrown title that led the way as Legend became their second biggest-ever release with $26.9m (£18.4m), providing a third of their overall 2015 haul.