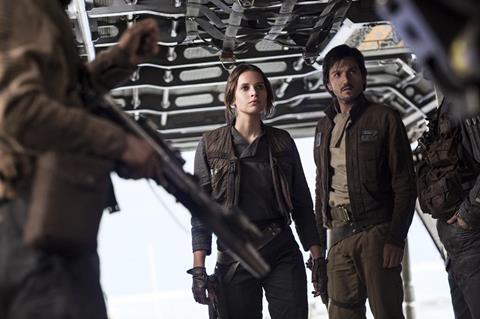 Rogue One: A Star Wars Story has landed at the top of the UK box office with the biggest opening of 2016.

With cinemas closed next Sunday due to Christmas Day and Christmas Eve not historically a strong cinema-going day, Rogue One will suffer a big drop this coming weekend, but will start to pull in healthy midweek numbers due to the school holidays.

Fantastic Beasts And Where To Find Them fell almost 50% with the arrival of Rogue One.

Over the festive period, Fantastic Beasts will likely become the biggest film of the year to date, and overtake Prisoner Of Azkaban ($57.6m/£46.1m) in the process.

Through The Wall recorded a UK debut of $10,400 (£8,446), including previews, from its three sites through Curzon Artificial Eye.

Arrow Films’ re-release of 2002 cult classic Donnie Darko is among the films receiving a limited release.