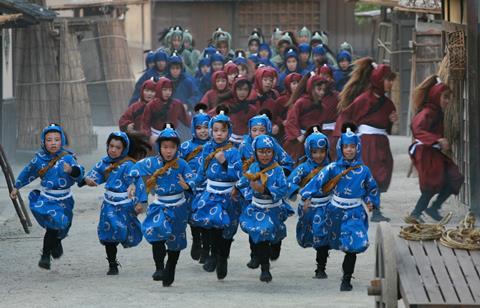 A colourful production of ecstatic wackiness, Takashi Miike’s live-action adaptation of the long-running anime series Nintama Rantaro is a hilarious family movie that will handsomely reward younger viewers and fans of the original, but might inevitably alienate the uninitiated with its scattershot structure, exaggerated makeup and comically surreal imageries.

Marking the prolific director’s return to zanier territory after impressing with a couple of sombre samurai dramas, 13 Assassins and Hara-Kiri: Death of a Samurai, Ninja Kids!!! can expect a warm welcome in Asian markets already familiar with the TV anime after its late July Japanese release. Festivals trading on Miike’s recent acclaim will find a crowd-splitting oddity on their hands, while prospects for overseas release may be limited by its cultural specificity.

The film opens with the young Rantaro (Seishiro Kato) getting enrolled as a first grader at a ninja academy, and is essentially made up of a relentless sequence of silly gags as we’re first introduced to Rantaro’s quirky classmates and quirkier learning experiences. A more discernable storyline then emerges halfway, momentarily grinding the narrative to a halt to reveal a convoluted back story about a ninja-turned hairstylist family threatened by an assassin squad, before setting the ninja school students on a gleeful foot race with the said assassins to ring a certain temple bell in a distant mountain.

The original’s premise – of a bespectacled little boy growing up in a special boarding school with two friendly sidekicks – may sound awfully familiar for the Harry Potter generation, but Miike’s movie is almost one of a kind in its stylistic approach. Under the director’s excessively faithful recreation, the film may enchant or completely turn off a viewer with its bizarre attempt to give the characters the exact same looks as their animated counterparts.

Its jarring visuals aside, Ninja Kids!!! fully deserves its multiple exclamation marks with its overwhelmingly positive energy alone. After all, it’s hard to argue with a bunch of kids revelling in the absurdly efficient use of pitfalls and booby traps, headed by a schoolmaster who preaches all guts and, one presumes, not a whole lot of skills.