NOW: In The Wings On A World Stage 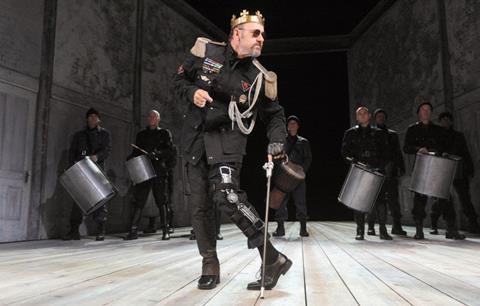 There is much to enjoy in Jeremy Whelehan’s NOW: In The Wings On A World Stage, especially if you are a fan of Kevin Spacey and/or William Shakespeare and/or theatre. But in the end this nicely shot documentary is nothing more than a puff piece aimed at stating the obvious – that it was fun to be an actor in Spacey’s touring company as they staged more than 200 performances across three continents of his acclaimed version on Richard III.

There are some fascinating moments to be sure, and Sam Mendes and Kevin Spacey are articulate and insightful when it comes to describing preparation and the way they work.

In truth that isn’t necessarily a bad thing. The film is planned for a series of platform one-off releases on May 2 and then go speedily to VOD and DVD, aimed fair and square at those who saw production, or who wished they had, but there are times when a tone of self-congratulation permeates through, especially when the phrase “magic of theatre” gets yet another outing. The film had its premiere at the Tribeca Film Festival.

The title comes from line in Richard III  - “Now is the winter of my discontent’ – and the film follows the Bridge Project’s collaboration between London’s Old Vic, NYC’s Brooklyn Academy of Music and Sam Mendes’ Neal Street Productions to stage classic pieces with casts made up of American and British actors. The film follows the Richard III collaboration as the touring company prepare for their world tour.

There is much musing about acting; how it impacts on life; concerns by American actors that their British counterparts are more at ease performing Shakespeare and shots of the various performers backstage at rehearsals or putting on their make-up, but to an extent the majority of the film works as a thespian travelogue as they head around the world to perform in theatres in Epidaurus (in Greece), Doha, Beijing, Istanbul, Sydney, Naples, San Francisco, and a concluding performance in Brooklyn.

There are some fascinating moments to be sure, and Sam Mendes and Kevin Spacey (who first worked together on the film American Beauty) are articulate and insightful when it comes to describing preparation and the way they work, but when the film heads off into home movie ‘what I did on my holidays’ footage it loses what edge it was aspiring to have.

Plenty of time is dedicated to the actors away from the stage, wandering the Great Wall of China; relishing a trip on a luxury power boat off Naples (paid for by Spacey it is pointed out); driving through the deserts near Doha, or wandering the Forbidden City in Beijing. The most interesting part of the trip comes early in the film as they perform at the magnificent amphitheater at Epidaurus, built in the fourth century BC and considered the most impressive of Greek theatres in terms of acoustics and aesthetics, holding up to 15,000 spectators