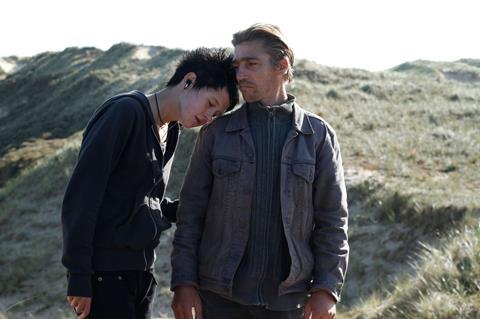 French director Bruno Dumont may not make religious films as such - perhaps it’s truer to say, theological ones. Certainly, he makes films in which the big questions are invoked, but in ways less explicitly religious than obliquely metaphysical. In his sixth feature Outside Satan (Hors Satan), he seems to present a very ambivalent Jesus figure.

Using both longueurs and repetitions, Dumont has a way of holding our attention by refusing us the expected answers.

Yet, until he pulls his big dramatic twist at the end, Dumont’s drama is grounded in everyday concrete reality. Lead actors who initially seem uncommunicative, even unappealing, prove idiosyncratically compelling in a film that sees Dumont stripping his style to the bones, with echoes of his 1997 debut The Life Of Jesus. Some viewers may find the film infuriatingly elliptical, but it will find admirers among Dumont’s hardcore followers - and indeed, anyone with a taste for art cinema at its most uncompromisingly gaunt.

Set in along a sparsely vegetated strip of Northern France, on what’s known as the ‘Opal Coast’, the film is about a ragged, no longer quite young man (Dewaele) who camps out on a deserted beach; none of the characters are named, and he’s listed in the credits as ‘The Guy’. At the outset, he’s seen wandering around the vicinity - much walking over hill and dale takes place throughout - and he has a habit of falling to his knees, in a prayer-like position.

He has a close bond with a young local woman (‘The Girl’, Lematre), although he’s oddly distant and refuses physical contact. She tells him she’s distressed about something, and the Guy obligingly produces a rifle and kills a man later revealed to be her abusive stepfather. The Guy - also seemingly possessed with healing gifts - later comes to the Girl’s aid when she mentions the unwanted attentions of a man who guards a local stretch of grassland. In fact, his remedy is surprisingly drastic, but all methods seem legitimate when, like the Guy, you appear to be beyond good and evil.

Despite its surface realism, the film is anything but naturalistic, conventional rules of behaviour simply not applying. Whether responding to a killing or an apparent miracle, characters tend to remain resolutely impassive, and actions rarely have normal consequences - although police show up after the stepfather’s killing, no-one appears to quiz the Girl, and the Guy openly carries his rifle around with him.

The title remains enigmatic. Is the Guy safeguarding this enclosed world against Satan, or is he himself good and evil combined in one form? As events heat up, most startlingly in a bizarre encounter with a female backpacker, the riddles pile up and hyper-laconic dialogue keep us guessing not only about the answers, but to a great extent, about what the questions are in the first place.

Using both longueurs and repetitions, Dumont has a way of holding our attention by refusing us the expected answers, while highlighting marginal elements such as the amplified breathing of the characters as they walk. As ever, Dumont casts actors more on the strength of their presences than of conventional acting skills, and the saturnine Dewaele and vulnerable Lematre, with her quasi-Goth pallor, make a strikingly against-the-grain duo.

Yves Cape’s Scope camerawork explores landscapes in downbeat, deglamourised fashion, although there are some strikingly heightened effects along the way - notably a curtain of bush fire that comes visually, and, out narratively of nowhere.