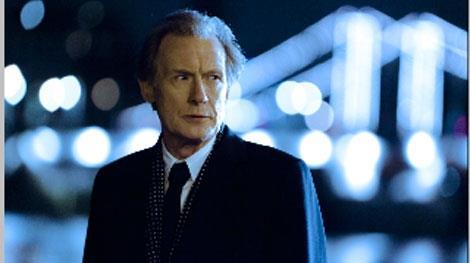 Playwright and screenwriter David Hare strays into John Le Carre territory with Page Eight, a comfortingly traditional conspiracy thriller travelling through the murky labyrinth of lies, betrayals and moral failures at the heart of the British political establishment.

Nighy is extremely sympathetic as an eternal pragmatist forced to pin his colours to the cause of truth and justice.

A well-heeled production and a powerful cast of British stalwarts will make this a prestige television attraction when it is broadcast in the UK and US this autumn whilst festivals may consider it a handy addition to any programme with an emphasis on contemporary British cinema. The feature is due for a BBC television transmission later this year, but had its world premiere at the Edinburgh International Film Festival.

There is something of the chivalrous knight in this jazz-loving, old school patriot. His best friend, MI5 boss Benedict Baron (Michael Gambon) reveals a secret dossier with evidence of American torture black spots throughout the world that have been known to the British Prime Minister Alec Beasley (Ralph Fiennes) despite public denials to the contrary. When Baron dies, Worricker feels it is incumbent upon him to ensure the contents of page eight are not forgotten or concealed.

Despite a seasoning of contemporary references, Page Eight has an old-fashioned feel of Cold War thrillers or even Defence Of The Realm (1985) in its shadowy encounters, cryptic conversations and cynical banter.

The dialogue is perhaps just a little too arch and eloquent to avoid the charge of theatricality but the performers relish the wit in the words and Nighy is extremely sympathetic as an eternal pragmatist forced to pin his colours to the cause of truth and justice.