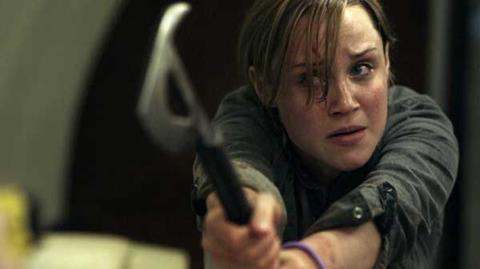 Purportedly inspired by actual, internet-related incidents, this Welsh-made suspense-horror picture joins a slew of low-budgeters which explore the sinister side of social networking, from the documentary Catfish to the teen exploitation melodrama Chatroom. It is also an entry in the cycle of strangers-stuck-together-in-peril-in-an-enclosed-space genre films that goes back to Cube but includes Saw, Breathing Room, Exam and others - with the refreshing new wrinkle that the enclosed space here isn’t the usual basement or dungeon but a private jet in flight.

It addresses its subject effectively, and may prompt some viewers to moderate online habits, but works primarily as a solid horror-thriller.

Jo (Scarlett Alice Johnson, a former EastEnder), Max (Jack Gordon, of The Devil’s Business), Dave (Michael Jibson, held over from writer-director Crow’s first feature Devil’s Bridge) and Gwen (Elwn Rhys, from Welsh-language soaps) believe they have won a contest sponsored by Facebook-like site All2gethr.com and board the jet under the impression that they are en route to a luxury weekend in New York.

Early intimations of ominousness - including a balaclavad raider swooping on Jo’s mother just after she has dropped off her young son to stay with her while she’s away, and an insistence that the winners give up their mobile phones for the duration of the flight - are overcome by complementary champagne.

The suspense builds up as it becomes apparent the plane’s flight-path is for Oslo, the corporate headquarters of All2gethr.com and that these strangers have a connection with a particular, unpleasant net-related incident. The ensemble performances are all excellent, with Rhys perhaps the stand-out as a sham good-time girl who is actually a virginal poseur, and the first half - which features talk and revelation - is followed by an attempt at action in confinement. It addresses its subject effectively, and may prompt some viewers to moderate online habits, but works primarily as a solid horror-thriller.The film world premiered at Fright Fest in London.