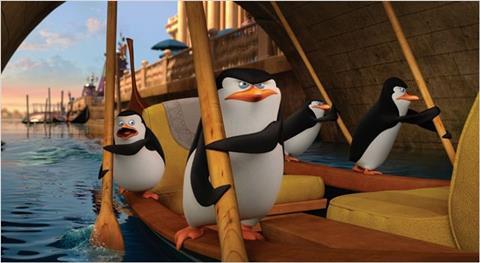 They were briefly seen comic relief in the original franchise, but now the four cutely intrepid penguins from the Madagascar movies get their own spin-off, a lightweight 3D animated comedy-adventure that barely takes a breath during its ninety minutes of silly fun. Just as it did in 2011 with Shrek series spin-off Puss In Boots, DreamWorks Animation could turn a healthy profit from letting these Penguins Of Madagascar loose on their own.

The Charlton Heston-channelling McGrath gives the standout vocal performance but Malkovich and Cumberbatch add considerably to the fun.

A US release on Nov 26 – through worldwide distributor Fox – will give the film an extended Thanksgiving holiday weekend opening, though matching the final $216m domestic tally of 2012’s Madagascar 3: Europe’s Most Wanted seems like a long shot. International markets, most of which get the film before Christmas, should produce a much bigger haul, given that Madagascar 3 ended up with $531m outside the US and Canada.

Directed by Madagascar franchise writer-director Eric Darnell and Simon J Smith (Bee Movie) from a script by a team of TV comedy and animation writers, the spin-off takes its title characters on a frantic James Bond-style action-adventure (with a bit of Guardians Of The Galaxy thrown in).

Skipper (voiced, as in the original franchise, by Madagascar series co-director Tom McGrath) and cohorts Kowalski, Rico and Private (voiced by the same team of DreamWorks animators) waddle onto a plot hatched by a mad scientist octopus (John Malkovich) to eradicate the global penguin population. To foil the plot, the off-kilter but always-game penguins join forces with a high tech wildlife protection group whose agents include a pompous husky (Benedict Cumberbatch) and a feisty seal (The Hangover’s Ken Jeong).

The action ricochets from Venice to Shanghai to Madagascar to New York and the film throws in adult-oriented gags – some of them funny, most of them throwaway – about everything from wildlife documentaries to air travel to Skype to Riverdance.

The Charlton Heston-channelling McGrath gives the standout vocal performance but Malkovich and Cumberbatch add considerably to the fun, suggesting that guest-star voices could be an important element if the film gives rise to its own franchise (a Puss In Boots sequel is already on DreamWorks’ 2018 release slate).