Prince of Persia: the Sands of Time 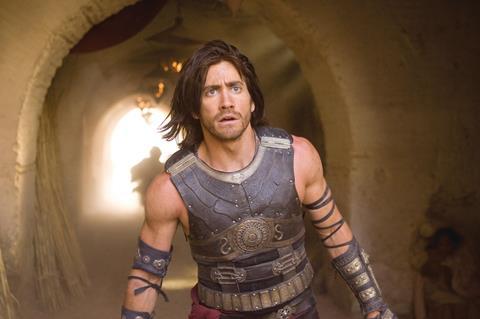 Less bloated, but also less cheesily entertaining than the Pirates of the Caribbean movies on which it seems to be modelled, Prince of Persia: the Sands of Time may turn out to be only a minor blockbuster, at least by the high blockbuster standards of producer Jerry Bruckheimer. How minor will determine whether this deliberately old fashioned fantasy action-adventure – in which Jake Gyllenhaal makes a credible action hero debut – becomes the start of another Disney/Bruckheimer franchise or just a one-off summer hit.

In his first attempt to carry a big action film, Gyllenhaal is no Douglas Fairbanks but he does look suitably buff and he for the most part delivers the necessary blend of charm and physicality.

The video game adaptation begins its rollout this week in the international marketplace. The genre and setting should ensure a big international haul, though without Johnny Depp’s star power to boost it the take probably won’t approach the levels achieved by the first three Pirates films, all of which performed particularly well outside North America.

Prince arrives in the US on May 28, in the same Memorial Day weekend slot as the most recent Pirates instalment (2007’s At World’s End) and with the same PG-13 rating. Gyllenhaal and co, however, will have to compete with the holiday weekend’s much-anticipated Sex And The City 2 and with somewhat comparable mid-May release Robin Hood.

The plot is built around elements from the 2003-5 Sands of Time video game trilogy, part of the 20-year-old Prince of Persia game franchise. However screenwriters Doug Miro, Carlo Bernard (both of whom also worked on Bruckheimer’s other summer film, The Sorcerer’s Apprentice) and Boaz Yakin (Remember The Titans) reduce the mythology - the Sands are a gift from the gods that allow the possessor of an ancient dagger to turn back time - to little more than a McGuffin.

Veteran British director Mike Newell, who made his mark in this genre with Harry Potter and the Goblet of Fire, does an efficient job mixing intrigue with action and humour. Working with director of photography John Seale (The English Patient), he also captures some impressive landscapes shot on the film’s Moroccan locations (studio work was done in the UK).

Most of the action involves Dastan’s attempts to evade capture after being blamed for a royal murder. The acrobatic stunt work, based on the French rooftop-jumping trend known as parkour, makes a refreshing change from standard fight scenes.

Though there is one big battle scene there are fewer set pieces than there were in the overstuffed Pirates films, allowing a manageable hour-and-three-quarter running time.

Computer generated effects are employed quite sparingly. They work well enough in the occasional sequences when Dastan uses the dagger to briefly reverse time, less well in the climactic sequence when the full power of the Sands of Time is unleashed.

The humour comes mostly through the character of a roguish desert entrepreneur played by Alfred Molina (last seen in An Education). The character produces a few amusing moments but nothing as enjoyable as the antics of Depp’s Jack Sparrow in the Pirates series.

In his first attempt to carry a big action film, Gyllenhaal is no Douglas Fairbanks but he does look suitably buff and he for the most part delivers the necessary blend of charm and physicality. His shaky British accent (presumably adopted to fit in with the mostly British supporting cast) is a distraction. He and Arterton make a handsome lead couple, though their banter isn’t helped by the script’s lame jokes.