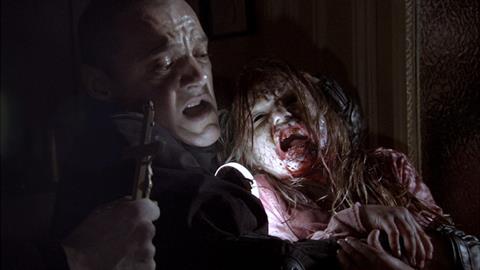 A real-time sequel which literally takes off the moment its predecessor ends, [REC]2 keeps the adrenalin pumping while ramping up the good-versus-evil element with an Exorcist-style subplot about demonic possession. Neatly paving the way for [REC]3 with a cliffhanger ending, it has enough invention and wit to extend the saga into a franchise even while the novelty value of the 2007 faux documentary has worn thin. Writer/directors Balaguero and Plaza should be busy with the series for some years.

[REC] 2 is more of a non-stop ride from start to finish and will exhaust older viewers with its frenetic hand-held camera work, muffled sound and hysterical shrieking

[REC]2 is a successful sequel mainly because it feels like an organic continuation of the first film rather than a contrived new story or situation. While the US remake Quarantine was not a big enough hit to spawn its own franchise for Screen Gems, the Spanish sequel(s) should continue to generate a healthy international business among horror-hungry teens – theatrically, but especially on DVD.

The opening scene recalls the chilling final moment of [REC] in which hardy reality TV reporter Angela Vidal (Velasco) is pulled into the darkness by a disfigured monster in the penthouse of a Barcelona apartment block whose inhabitants have been infected by a  terrifying rabid virus.

Minutes earlier, an official from the Ministry Of Health (Jonathan Mellor) and three heavily armed members of a Special Operations Unit enter the sealed off building with a mission to discover what has been going on. One is charged with filming their movements with a camera. Under the official’s instructions, they head straight to the penthouse and soon discover that their real mission is to find a test tube full of the blood of a young girl who had been possessed by a demon, a character referred to in the final section of [REC]. Conveniently, the health official turns out to be a priest skilled in the ways of exorcism.

Naturally, finding the blood is easier said than done and within the hour, they are beset by the building’s many infected crazies as well as a fireman, a concerned relative and three nosy kids who have snuck into the building through the sewers (conveniently with a camera to record everything they find).

Also getting a second outing is the beleaguered Ms Vidal, who appears to have survived the attack in the penthouse and remained uninfected.

Without any of the build-up and exposition of its predecessor, [REC] 2 is more of a non-stop ride from start to finish and will exhaust older viewers with its frenetic hand-held camera work, muffled sound and hysterical shrieking. And whereas [REC] felt fresh and original in its concept and execution, the demonic elements here smack of the derivative. As if a horrific virus borne through blood and saliva weren’t terrifying enough, the film-makers had to drag in the tired old Catholic myths and legend.

But then [REC] itself was always a clever mutation of multiple horror standards so why not throw in a crucifix-wielding priest straight out of The Omen or The Exorcist?  As [REC] 3 promises to take the virus out of the building and into the world at large, Balaguero and Plaza have many opportunities to plunder other horror favourites in the future.