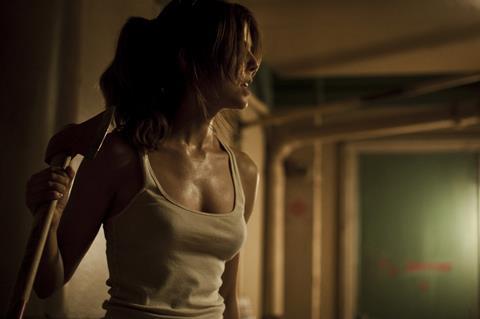 The Spanish [●REC] horror franchise demonstrates an admirable ability to evolve beyond its original premise and format – sidestepping the interchangeability that blights many long-running horror series. As with the Alien and Psycho series, there are givens for a [●REC] film – an outbreak of viral demonic possession, for a start – but each individual entry forges its own identity.

Balagueró and co-writer Manu Diez do include some plot surprises, but are mostly content to spring the same old scares.

[●REC] (2007), co-directed by Jaume Balagueró and Paco Plaza, starred Manuela Velasco as lightweight TV journo Angela Vidal, who happened to be shooting a documentary about firefighters when the outbreak began in a Barcelona block of flats.  The duo reteamed for [●REC]2 (2009), which showed the infection getting out of the building, but then split to deliver alternate sequels.

Plaza’s [●REC]3 Génesis (2012) was the Evil Dead 2 of the series, getting away from found footage and delivering gory slapstick with a surprising romantic streak, while Balagueró’s [●REC]4 (aka [●REC] Apocalypse) similarly abandons the now-overworked found footage format (as used in the US [●REC] remake Quarantine) but reverts to the grimmer style of the earlier films.

Velasco, who sat out the last film, returns and the potential victims are cooped up in another enclosed environment – a rust-bucket ship co-opted by the shadowy authorities investigating the curse/plague.  It’s worth remembering that Armando de Ossorio’s Blind Dead series of the 1970s – the previous Spanish supernatural zombie franchise – also went shipboard in its fourth entry, El Buque Maldito (1974).

The battered, once-possessed Vidal and a couple of characters – macho HAZMAT boffin Guzmán (Paco Manzanedo) and a dotty old wedding guest (Maria Alfonsa Rosso) – who have suffered in the events described by the earlier sequels are taken to the ship under the care of a sinister scientist (Héctor Colomé) who is hoping to synthesise a cure for the demonic disease.  An infected monkey is mysteriously let out of its restraints and winds up in the food served to the requisite gun-toting grunts by a possessed cook, and the horror spreads again.

Vidal tries to prove she’s not the host of a devil worm that’s the source of the virus and hooks up with this installment’s liveliest new character, tech whizz Nic (Ismael Fritschi) – a superfan of her trivial TV show so starstruck that he barely notices the zombie attacks.  Balagueró stages the chaos impressively, but – as with most fourth go-rounds of any given premise – there is a certain familiarity that hampers the scares.  The use of an outboard motor as a zombie-shredding device is ingenious but hardly unprecedented.

Balagueró and co-writer Manu Diez do include some plot surprises, but are mostly content to spring the same old scares.  It’s a less distinctive film than the oddly sweet, ultra-gory [●REC]3 Génesis – which didn’t find favour with some [●REC] purists – but it keeps its pot boiling decently.  Last-reel developments suggest any [●REC]5 might go the mutant fish route.