British producer Richard Holmes’s latest project is a war drama based on the novel by Owen Sheers and directed by first time feature film-maker Amit Gupta. The film stars Michael Sheen and Andrea Risborough and is currently shooting in Wales and Herefordshire, UK. 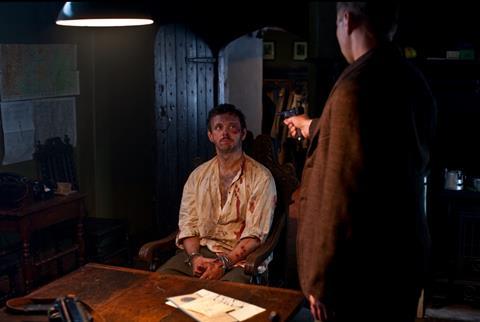 Synopsis: A war drama in which a group of women are forced to co-operate with a German patrol after their husbands disappear in a German-occupied Britain.

Writers: Amit Gupta and Owen Sheers have co-adapted the screenplay from Sheer’s novel.

Financing: Film Agency of Wales, Munich based distributor Square One (who has first option to buy the film for Germany)

The latest high profile project to shoot in Wales, following Richard Ayaode’s Submarine and Marc Evans Hunky Dory, is Resistance, which is based on the novel by Welsh writer Owen Sheers about an alternative World War II scenario in which the Germans occupy Britain.

The story centres around six women living in an isolated valley in Wales who wake up one morning to discover that their husbands have all disappeared. Things turn increasingly mysterious when a group of hard bitten Eastern Front war veterans arrive in the valley.

The idea to adapt Resistance for the big screen came from director Amit Gupta, who had met Sheers at a party and then again at a festival in New York and the two had hit it off. Gupta then gave the book to Waking Ned producer Richard Holmes, who he had worked with on the 2007 short film Love Story.

“I thought it had a genuinely fascinating hook for Europeans and even non Europeans – what if the Germans had counter attacked after D-Day? What would have happened if things had gone the other way?,” says Holmes, who went on to option the film rights last year and hired Gutpa and Sheers to write the script.

Despite a modest budget of £2m and the fact that it is Gupta’s debut feature, the film stars actors of the moment Michael Sheen, Andrea Riseborough and Tom Wlaschiha. “They came on board thanks to Amit, Owen and the script,” says Holmes.”Amit is coping remarkably well with his first feature and everyone has been very complimentary about the rushes,” says Holmes whose other producer credits include Eden Lake and Shooting Fish.

Despite its historical slant, Holmes thinks the film has a relevance to modern audiences. “It’s a drama about a conflict and collaboration and pragmatic co operation, it’s about a lot of those elements that are happening in the world today. And it’s not just a straight drama. It’s got the atmosphere of A Thin Red Line, and elements of mystery as well.”

The film is funded by the Film Agency for Wales, together with German distributor Square One, which put up development funding and still has first option to buy the German distribution rights. “I pitched it as something that is truly marketable in Germany. Square One distributed Street Dance 3Dso they do commercial stuff. And they saw it as a commercial but serious film,” explains Holmes, who is hoping to unveil the first footage at Cannes next year.

For Pauline Burt, chief executive of the Film Agency for Wales, putting production funding into the project was a no brainer. “Resistance is a beautiful novel with clear cinematic potential and the project presented a great opportunity for us to facilitate key Welsh talent.”

The film began shooting in the Welsh town of Abergavenny, where the novel is set, on October 18 and wraps on November 20. Thankfully, says Holmes, the Welsh weather has been kind. “We would have shot no matter the weather, but we’ve been lucky that we’ve not been sitting round in the rain,” he laughs.The film has also shot some scenes just over the English border in Herefordshire.

And how has Holmes found the experience of shooting in Wales? “It’s been fantastic. Cardiff is only an hour away so we have used crew from there. And the fact that Owen is a local Abergavenny boy, means there is a lot of goodwill.”

“Plus, there is nothing like seeing the reaction to a guy in a German uniform walking around the Welsh hills,” he adds.

Next up: Holmes is producing another Welsh film, Rise Of The Appliances, based on a short film written by John Smith and Rob Sprackling (Gnomeo And Juliet), about domestic appliances rising up and eating people. Smith and Sprackling are writing the screenplay, with Sprackling also directing. “It’s a straight out comedy. The genre is the star,” says Holmes, who anticipates a summer 2011 shoot.