An unusual marriage plays out in Peru 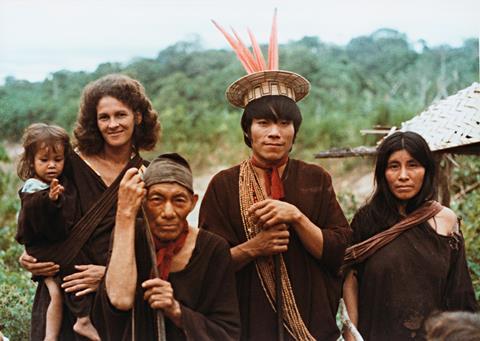 The marriage of Francisca Oliveira da Silva (aka Piti) and Antonio Piyako defied the conventions of both their cultures. She is a white Brazilian, the daughter of a ‘rubber soldier’; he is a member of a Peruvian indigenous community, the Ashaninka. This documentary takes as its jumping-off point their relationship, revolutionary in the 1970s and even now unusual; but goes on to explore the journey of the Ashaninka people and the ongoing tensions with their white neighbours near the town of Marechal Thaumaturgo. Slow-burning and observational in approach, the film volunteers snippets of context and background information, but would perhaps benefit from stronger storytelling in conjunction with its focus on snapshots of the daily life of Antonio and Piti’s extended family.

The appearance of tranquility is deceptive

But while Antonio & Piti could be more informative for the benefit of an overseas audience, it’s worth mentioning that its primary intended audience is the indigenous community, for whom background information is filled in by lived experience. The directing credit is shared between Wewito Piyako, one of Antonio and Piti’s sons, and French-Brazilian filmmaker Vincent Carelli, who, under the umbrella of the Video In The Villages (Video Nas Aldeias) collective, which he founded in 1986, focuses on exploring indigenous narratives. The film should go on to find further festival interest, particularly in events showcasing voices from South America and indigenous communities.

Handsome establishing shots at the film’s opening paint a picture of a peaceful idyll. Children patter barefoot, weaving through coexisting generations of Ashaninka people who work together to manage their patch of land in the northwestern Brazilian state of Acre. The appearance of tranquility is deceptive. Smiling shyly, Piti seems too reticent to be the formidable matriarch that family anecdotes celebrate. But the portrait pieced together is one of a concrete will and a forceful sense of justice. She risked estrangement from her family to marry Antonio (her mother refused to attend the wedding) and then generated further hostility from the white community when she started battling for the rights of her adopted people. “I made them give back to the Indians what they didn’t want to sell,” she explains, her sentences spare, her attention spread between the fabric she weaves and the toddler who teeters past. Her lobbying on behalf of the Ashaninka contributed to the demarcation of their lands, but put her in the crosshairs of an already tense conflict between the indigenous people and the rubber farmers, to the extent that attempts were made on her life.

As the film progresses, it becomes clear that Piti is not comfortable as the focus of attention, nor is this really her story at all. The camera follows her son, Isaac, as he reaches out to the family of his mother, showing them footage that was shot of her father decades previously. Then he broaches the subject of his plan to run for mayor of the local town. His white relatives are doubtful, citing the antipathy between cultures. But the extent of the tension only becomes clear when another one of his brothers, Benki, is attacked in a bar brawl by a man armed with a machete. “I was born for this.” Benki reassures Piti, “I am ready to die anywhere.”

Slightly scattershot though it is, the film offers intimate glimpses of life for a people who found themselves caught up in a conflict over the land they had always inhabited; and who combine tradition and ritual (ayahuasca ceremonies abound) with a progressive approach to agroforestry and re-establishing the natural balance of the land.

Production company: Video In The Villages