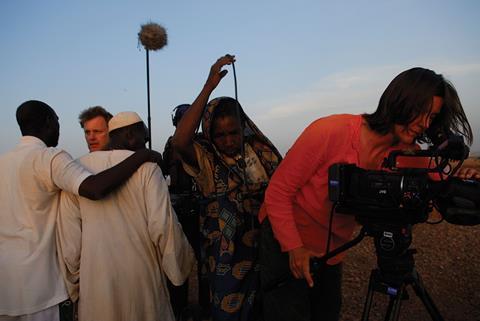 Kirsten Johnson has spent the past twenty-five years as a latter-day equivalent of Dziga Vertov’s The Man With A Movie Camera. Travelling across the world, she has captured haunting images, eye-witness testimony and precious memories for directors as diverse as Laura Poitras, Michael Moore and Barbara Kopple. Cameraperson is Johnson’s feature-length directorial debut and is offered as a personal memoir but builds into a perceptive, thought-provoking examination of the responsibilities and obligations of the documentary form. The Sheffield Doc/Fest Grand Jury Prize should further enhance its status as a Festival favourite and must-see feature for anyone with an interest in documentary film-making.

A perceptive, thought-provoking examination of the responsibilities of the documentary form.

Cameraperson is marked by humility and humanity from its very opening frames with Johnson planning to use a collage of previously unseen footage from a variety of projects to revisit images that have “marked me and leave me wondering.” The viewer is faced with what initially appear to be random, unidentified sequences as we catch glimpses of her work from a boxer preparing to fight in Brooklyn to a midwife dealing with an endless succession of births in Nigeria and a boy talking about the loss of vision in one eye. We hear some off-camera comments about lighting and framing, we hear Johnson sneezing but what soon starts to dominate is the relationships that Johnson has to build with her subjects.

Her job is to frequently capture individuals at their most vulnerable and that requires establishing an immense degree of trust and compassion. Only in building that bond can subjects feel relaxed, unguarded and allow Johnson to discharge her responsibility to the truth. Whether it’s a Health Centre patient in Huntsville, Alabama who wanted to retain her anonymity or those with vivid stories of atrocities during the ethnic cleansing in Bosnia, you can almost feel the sensitivity that radiates from Johnson’s side of the camera. She is determined  to treat people as individuals rather than subjects. An elderly woman in Bosnia is reluctant to rehash memories of the bad old days but comes alive when asked about the dash of style apparent in the way she dresses.

There are striking images of an American flag blowing in the breeze at Guantanamo Bay, momentary glimpses of Wounded Knee, Tahir Square, Hotel Africa and the World Trade Centre. Johnson has been a witness to history on a grand scale and in its most intimate moments, for example when a soldier is interviewed by Michael Moore in Washington as he makes a public declaration that he will not return to another tour of duty in Iraq to kill poor people in foreign lands who mean him no harm.

The complex issue of how you retain a professional stance in the face of such emotional encounters is a recurring theme in the film. There is a moment when a young, unattended boy seems on the brink of playing with an axe and you sense the desire to intervene but Johnson doesn’t. Her job is to observe the moment and not alter it. Some of the most poignant scenes in the film are of Johnson’s mother after her diagnosis of Alzheimer’s as she walks outdoors in a howling wind looking like a forlorn orphan in the storm. In the face of immense personal heartache the camera remains unflinching, the responsibility to capture the truth is undiminished. The reward is a memory and an insight into the present through a knowledge of the past.

Cameraperson is about process and aesthetics, images and rules but it is also about empathy and ethical dilemmas. It proves to be generous in sharing Johnson’s understanding of the way being a committed cinematographer is not about detachment but about engagement with an individual subject, a vital issue and with the world at large.