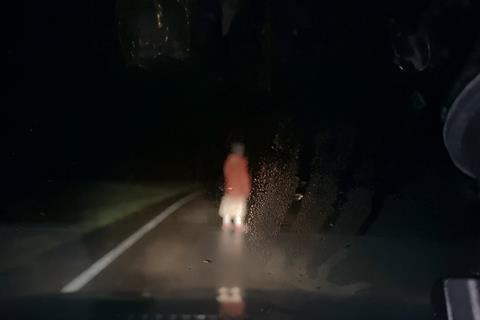 A found-footage horror for the era of live-streaming, Rob Savage’s follow-up to his break-out lockdown Zoom-chiller Host further mines the heightened realities and tensions of a world struggling with a pandemic. The film, which is shot entirely on iPhones, stars musician Annie Hardy playing a version of herself: she’s the host of Band Car, a volcanically profane livestream in which she improvises songs while driving around Los Angeles in a car. Tired of a locked-down America, she boards a plane to the UK to surprise her former bandmate Stretch (Amar Chadha-Patel). But it soon becomes clear that they have grown apart. Annie proudly displays a MAGA cap and a selection of liberal-baiting slogan T-shirts, Stretch has a Black Lives Matter poster in his window. But an ideological clash turns out to be the least of their problems in this furiously chaotic horror, which delivers laughs and jumps but few real scares.

The result is a freewheeling, erratic energy which is constantly tipping over into aggression and confusion

Hardy’s forceful presence is both an asset — she’s gleefully provocative and caustically funny — and an impediment. (A virulent anti-masker and Covid-denier, she’s not a remotely sympathetic character.) This latter point means that it can be hard to really care whether or not she gets her face chewed off by whatever nameless evil is lurking in the British countryside. But that’s really not the point of DASHCAM, which makes the most of its Blumhouse backing — this is the first film from a three-picture deal which Savage signed off the back of Host’s success — to splash out on some seriously grisly splatter effects. Unlike Host, which was created and designed to be watched on a laptop, DASHCAM will work best with a live audience, whether in late-night slots at further film festivals or through a theatrical release.

The plot is a wisp of a thing which leaves plenty of questions unanswered. Following a bust-up with Stretch, Annie steals the car that he uses for a food delivery service. An order comes in and, on a whim, Annie decides to take the job, but ends up with an unwanted passenger instead.

The footage was shot by the cast on phones, and many of the scenes were improvised from outlines. The result is a freewheeling, erratic energy which is constantly tipping over into aggression and confusion. Hardy’s persona in the film is pure troll — scrappy, confrontational and unapologetically un-PC — and a brief glance at her real-life social media reveals that she is basically playing herself rather than a fictionalised version thereof.

The shooting technique is effective, up to a point, but it’s also rather visually incoherent at times. Perhaps the most interesting device is the stream of comments from Band Car viewers which scroll up the left-hand side of the screen. Much of it is soul-crushingly banal, but there’s a sense of mischief to some of them: “I saw Blair Witch: You gon die,” says one poster as Stretch stumbles off into the woods. The scrolling texts act like a kind of cat-calling commentary, encouraging vocal audience participation. Ultimately, this is not just a film which is designed to be watched in a cinema, but one which should be viewed with the rowdiest audience available.