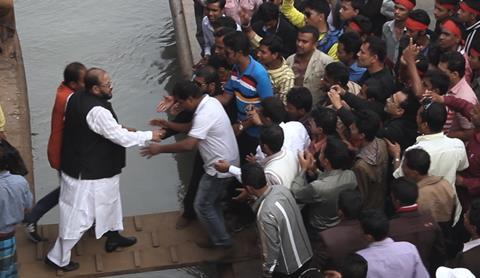 Eight years after 2013 Cinema du Reel winner Are You Listening!, Bangladeshi documentarian Kamar Ahmad Simon continues his loosely-connected Water Trilogy with the unassuming but irresistibly immersive riverboat mini-epic Day After… Don’t be fooled by the bland title: this intelligently-observed chronicle of a vintage paddle-steamer’s chaotic two-day journey from capital Dhaka to provincial Khulna ranks among the year’s most accomplished and memorable non-fiction enterprises.

Loaded with human interest, wry humour, salty dialogue (many passing vessels are subjected to a tongue-lashing from the irascible captain) and sensory pleasures

A consistently absorbing, illuminating travelogue, the picture teems with lively detail, colourful chatter and several impromptu musical contributions by the passengers. This is also a strongly political work: it was filmed on the eve of December 2018’s general election, gaining added depth via direct and indirect commentaries on the populous Ganges Delta nation’s problematic state. A berth in IDFA’s International Competition should prove an auspicious launch into the crowded waters of the global festival circuit for this deft crowdpleaser which runs just under two hours but should leave many viewers hungry for more.

A long-standing fixture on many an adventurous traveller’s’ bucket list, the 150-mile trip aboard the century-old steamer Rocket (the last of eight such craft, the rusty colonial-era relic is now powered by diesel) also represents an economic form of transport for ordinary, impoverished citizens. As the title implies, the specific journey selected by the filmmakers seems to be quite a typical one, with an eclectic range of passengers — stratified into “cabin” and “deck” classes — mingling along the way.

In the venerable tradition of shipboard cinema, all human life seems to be here. The travellers collectively endure mishaps of varying degrees of severity, the chief natural hazard being the risk of becoming grounded on sandbanks. The responsibility for dredging and maintaining such watercourses lies with national and regional governments, and the deficiencies of these authorities are a source of particular discussion among passengers and crew alike.

Such heated debates play out against a backdrop collage of radio-reports, elegantly patched together by sound-designers Sukanta Majumdar and Alok De, detailing party disagreements and corruption scandals as polling-day looms. The Rocket’s manifest even includes a high-ranking politician from the government, who at one point is subjected to an amusingly stern grilling by a journalistic team of Bangladeshis studying at Stanford University.

Also on board is bubbly young vlogger Mamun, whose cheery dispatches are neatly interpolated into Simon’s own footage, and whose attempted deployment of a drone around the hour mark provides the film’s comic highlight. Just as the viewer is concluding that this gadget’s watery fate illustrates the inferiority of flashy 21st-century technology compared with the ancient, rickety but dependable Rocket, the ship itself runs into major operational problems — as recorded via Mamun’s smartphone.

While the Rocket may experience frequent delays and obstructions, the picture itself proves a commendably sturdy conveyance. It is certainly freighted with multiple allegorical and metaphorical implications for those wishing to ponder same, but is also loaded with human interest, wry humour, salty dialogue (many passing vessels are subjected to a tongue-lashing from the irascible captain) and sensory pleasures.

Working as his own cinematographer, Simon is alert to every vibrant detail of the shoreline, his widescreen images providing sufficient vicarious delights to satisfy any armchair tourist. Editor Saikat Sekhareswar Ray meanwhile generally favours short sequences, moving fluently between and beyond decks as Day After…’s complex tapestry takes shape.

Humour abounds, including in the form of skeptical commentary about the production itself: “They are just randomly filming the passengers!” remarks one young woman, accustomed to the formulaic narrative requirements of Bangladeshi and Indian mainstream filmmaking which demand song and dance numbers plus a hero and heroine with whom to identify. Hopefully she will get to see the finished work, which lacks neither musical interludes nor figures — human, natural, artificial — lending themselves to sympathetic engagement.