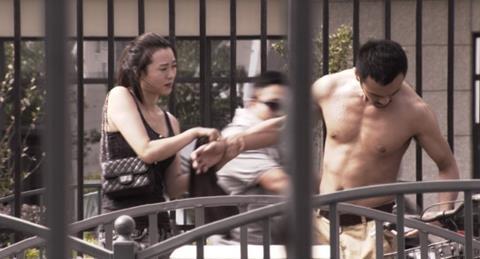 The other side of parenting in modern-day China — the difficulties of and stigma attached to solo motherhood, rather than the restrictions placed on the number of children per family — is thrust into the spotlight in Dog Days (San Fu Tian). In telling the tale of a young woman searching for her missing baby, first-time feature director Jordan Schiele stresses the rarely considered nature of his topic in both his narrative and aesthetic choices. Commencing with a brightly lit scene before cloaking the bulk of the film that follows into shadow, his approach isn’t always subtle, but it is effective.

Indeed, rarely is the movie’s protagonist, Lulu (Huang Lu), sighted without patches of darkness shading her expression, offering a constant visual reminder not only of the complexities of her situation, but of the murky standing of those living life in the margins. The intricacies of her plight might reflect the feature’s country of origin, particularly the fear of an unmarried woman raising a child on her own; however her desire for a better future is certain to appeal more broadly, and will likely propel the film to further festival outings.

Single parenthood is far from Lulu’s mind when Dog Days begins in an underprivileged suburb of Changsha in Hunan Province. When she works as a dancer by night, she leaves her son with his father, Bailong (Tian Mu Chen). Unable to locate them one evening after her shift ends, Lulu is forced to turn to a local drag performer, Sunny (Luo Lan Shan), for assistance.

Lulu is so desperate with maternal longing that she nurses a sleeping stranger’s infant on the train to Shangai, and that yearning doesn’t subside. Alas, the sultry weather isn’t the only stark reality to greet her and Sunny as they arrive in Shanghai. After discovering that Bailong has sold their son to a wealthy doctor and his wife, spinning a lie about Lulu’s death to expedite the transaction, she must decide whether a biological mother’s influence or an upbringing of comfort and means is the best option for her child.

It is here that Lu and Shan’s performances prove revealing, as well as the film’s most resonant element. Internalised in their focus but expressive in their emotions, their efforts are disarmingly moving in a film that values its brooding tone — complete with a sparsely used but suitably atmospheric score — over both dialogue and action. Lu, previously seen in Apolitical Romance and Blind Massage, wears the devastation of a mother separated from her offspring in every fixed stare and shuffling step. Shan, who made his first screen appearance in A Touch of Sin, seethes with the uncertainty of being caught in the crossfire of someone else’s troubles.

Though Dog Days doesn’t shy away from the grim existence of China’s lower classes, both Lu and Shan play their parts as though they’re stuck between the harsh glare of hard truths and the soft shimmer of something better. Their characters often seem as if they’re sleepwalking as a coping mechanism, as writer/director Schiele yet again emphasises his story in his own style.

As largely naturalistic as the feature remains, the slightest trace of a dreamlike sheen — of the hope of brighter days beyond the pervasive shadows — still peeks through. It’s a confident move by the scribe and helmer, who graduates from short films, commercials and cinematography credits (including on 2015 omnibus effort Distance) with ease with this soulful and thoughtful drama debut.