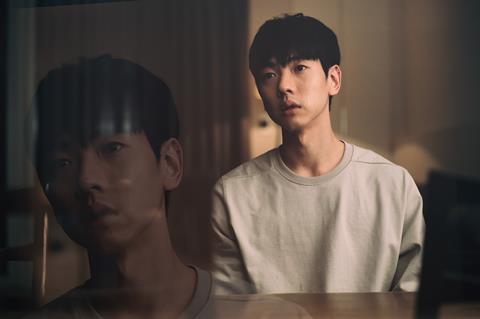 There are several possible explanations for the freak car accident which claimed the life of 23-year-old Young-in (Jang Yoo-sang). The one that his mother, Hye-ra (Moon So-ri), refuses to contemplate is that he did it deliberately. Using technology now available in the film’s near-future setting, she brings him back to life by combining his brain with an AI and an engineered android body. But she soon realises that all is not right, and that the AI has smothered her son’s consciousness and is pretending to be him. Although icily stylish visually, this philosophical sci-fi is let down by a meandering screenplay which struggles to clearly articulate its ideas.

The focus is not on answers but more on creating an ominous, clouded atmosphere

Empty Body is the second feature from Kim Ui-seok; his first, After My Death, won Best Picture in the New Currents strand of Busan 2017. This new film is extended from a 50-minute television production with the addition of a few too many scenes which do little to drive the story. While Empty Body looks terrific, there are pacing issues which might limit its potential to connect with a theatrical audience. Meanwhile, festival and industry viewers will likely appreciate the picture’s striking visual flair, which marks Kim as a talent to watch, given the right material.

The production design and cinematography are not the only impressive tech credits. Music is also evocatively used, in particular in a terrific opening sequence which juxtaposes the shredding of a wrecked car at a scrap yard with a voiceover reading out the coroner’s report on Young-in’s death. The score utilises woodwind and percussion, but somehow taps into the urgent shriek of accident-scene emergency vehicles.

Hye-ra lives in the kind of pristine affluence in which, as anyone who saw Parasite will know, secrets lurk under the surface. She moves cautiously around the space, as if waiting for something terrible to happen. Instead, her son returns home, full of apologies for having lost track of time. Hye-ra glances at him coolly. In the next scene, she is firmly asserting that the young man who looks exactly like her Young-in is “certainly not him”. The representative of the company which provided the AI/human brain fuse regretfully informs her that her son’s consciousness has been extinguished. In a nice detail, the scene plays out against a backdrop filled with reflected white lines of light, subliminally evoking binary code.

The rest of the film is taken up with a slow-burning examination of whether the AI deliberately murdered Young-in’s consciousness or whether it was acting on Young-in’s instructions to end what remains of his life. Also explored is the question of whether an artificial intelligence has rights, or whether it is just a machine in service of its owner. These are themes which have been rigorously examined before, on multiple occasions and in numerous films, generally with more clarity. But the focus here is not on answers but more on creating an ominous, clouded atmosphere in which nothing is entirely certain. And in that, the film succeeds admirably.