Winner of Berlin’s Generation 14plus main award, ’Fortuna’ takes a low-key, show-burn approach to a crisis of faith 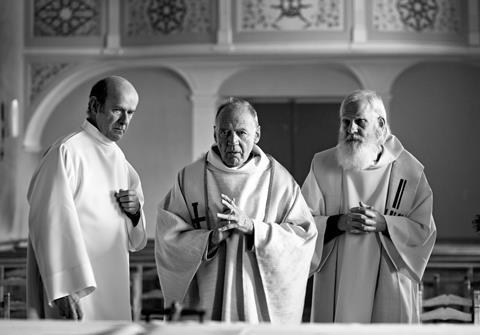 A fourteen-year-old girl from Ethiopia, separated from her parents during a traumatic sea crossing, Fortuna (Kidist Siyum Beza) finds temporary shelter in a Swiss monastery which clings to the snow-covered Alpine massif. She is isolated, grieving and dealing with a situation that no child should have to cope with, let alone by herself. This handsome, measured second feature from Germinal Roaux combines a portrait of a desperate migrant child with an interrogation of the crises of faith which result when devout Christians are asked to put the basic tenets of their religion into practice.

Fortuna premiered in Berlin’s Generation 14plus where it won both the youth and main jury award for Best Film in that section. So, while it enters a market somewhat crowded with stories of migration, the awards combined with the quality package on display should ensure that the film finds further receptive festival audiences. With its low key, slow-burn approach, Fortuna might struggle to make sufficient noise to register its presence in a theatrical release outside of its domestic market and francophone territories, though, despite the presence of Bruno Ganz in a key supporting role.

It’s a strikingly beautiful film. As with his previous pictures, including his Palm Springs International Film Festival prize winning feature debut Left Foot, Right Foot, Roaux shoots in pensive black and white. The cinematography, the boxy 1.33:1 aspect ratio, and the austere backdrop evoke Pawel Pawlikowski’s Ida. But more than that, the look of the film gives this most contemporary of stories an almost timeless quality. There’s one haunting wide shot, captured at the smudged, inky fringes of dusk, which captures a group of monks, each holding a lantern, as they traverse the snow up to the monastery, with the jagged loom of a mountain glaring over them. It looks like it could have been lifted from an early film by Dreyer.

One of the only migrants of African descent in the makeshift dormitories hosted by the Catholic friars, Fortuna could barely be more alone. She confides in a donkey and to an ad hoc shrine she has built containing photos of her parents and a crucifix. Her prayers to the Holy Mother – “God doesn’t listen to me” - give the picture its understated narration. In the crowded sleeping area, the light has a gauzy quality, the snowglare is filtered through the nets at the windows. Sound is similarly opaque and diffuse: an indistinct jostle of voices, radio chatter and song.

Shut away in her sadness, Fortuna clings to the one person who offers her what she takes for kindness, and a connection to her former home. Twenty-six-year old Kabir is a fellow Ethiopian refugee. She falls headlong in love with him; he allows her to project her own emotions onto him. “If you didn’t love me I would be dead already,” she tells him. Kabir’s gaze shifts uncomfortably. But when Fortuna tells him that she is pregnant, he snaps, slaps her and accuses her of “adding problems to my problems”.

Perhaps a little disappointingly, given that the film is hitherto a female-led tale of the transition from child to adult, Fortuna is not actually present for the pivotal discussion about the fate of the unborn child. Instead, two men – one a monk (Ganz) and one a local care worker – debate whether she should be encouraged to have an abortion or not. While it is no doubt a depressingly accurate situation, you rather wish that it was Fortuna’s own voice which held the ultimate authority over her body.