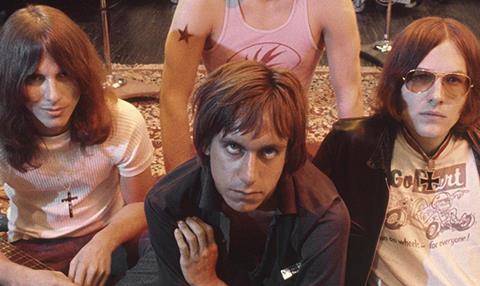 Iggy Pop’s status as one of rock’s great survivors is poignantly born out at the end of Jim Jarmusch’s documentary Gimme Danger, as we learn that the film is dedicated to four now deceased members of his former group the Stooges, including rhythm section the Asheton brothers, who feature prominently. But the film – very much about the Stooges as a band, rather than specifically about Iggy – is an exciting testament to the survival power of the Stooges’ music, reviled or ignored in its time, then rediscovered by the late 70s punk generation, and now widely celebrated as the work of – as Jarmusch claims at the start – “the greatest rock and roll band ever.”

Iggy Pop’s interviews here show him raging against the machine with gleeful and undimmed venom.

The Stooges were certainly one of 60s/70s rock’s most intense outfits, and have proved enormously seminal, the film’s final chapter showing how they influenced some of rock’s key noise-makers including the Sex Pistols and Sonic Youth. The film runs through the band’s wayward career, incorporating interviews with Pop – who proves an articulate and witty raconteur – as well as members of the band, notably the Asheton brothers (bassist Ron and drummer Scott), saxophonist Steve Mackay and the group’s later guitarist James Williamson. There’s also a healthy amount of 60s-70s footage of the band on stage, usually accompanied by their recorded rather than live music, plus archive TV and film clips, and moderately droll animations by James Kerr.

The pre-credits sequence documents the band’s collapse in 1973, when they were foundering in a morass of unprofessionalism, drug abuse and exhaustion. Iggy would soon re-emerge to achieve cult legendhood as a collaborator with David Bowie, but the pair’s famed Berlin period doesn’t figure here.

Jarmusch – returning to music documentary following his 1997 Neil Young concert film Year of the Horse – is interested specifically in the Stooges story, and in celebrating the group as a group. The story starts in the 60s, as James Osterberg from Ann Arbor, Michigan experiments with a career as a rock drummer, before teaming up with three local boys (the Ashetons and guitarist Dave Alexander), who after a shaky start (named the Psychedelic Stooges), get signed to Elektra Records, partly thanks to another local act, politico rockers the MC5, for whom Pop still has the greatest fondness and respect.

The Stooges made two incendiary albums for Elektra, their self-titled debut and Fun House, before falling apart. It was through David Bowie and his manager Tony DeFries that the band, now with guitarist Williamson, came to London to record the revered Raw Power album – made, Williamson grins, “without adult supervision”. Then the story goes sour, with DeFries’s MainMan company firing Pop “for moral turpitude”.

But that turpitude isn’t dwelled upon here - Jarmusch isn’t interested in the Rock Babylon story he could have told. Instead, the story skips to 2003 and a long-awaited Stooges reunion. There’s a little too much dull background information on this period – but footage of the decidedly older and tubbier band live show them to be just as potent as in their lean, deranged youth.

Despite the band’s induction into the Rock and Roll Hall of Fame, and Pop’s unshakeable icon status, they never became establishment figures, and Pop’s interviews here show him raging against the machine with gleeful and undimmed venom.

Jarmusch fans won’t find much of the director’s signature touch here, as he self-effacingly pays homage to a beloved act – Stooges fans will find plenty to enthuse about in the film’s ample coverage of a little-documented career. At the very least, Gimme Danger will send viewers back to the band’s first album – preferably on scratched, warped vinyl.