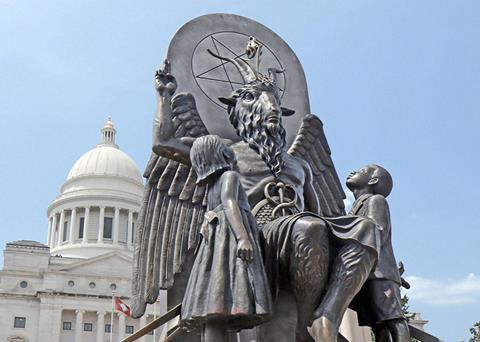 It’s time to retire your preconceptions about Satanism. According to this unexpectedly amiable documentary from Penny Lane, the new generation of followers of the horned one have more or less dispensed with ritual animal slaughter and are more likely to be found litter picking on public highways (with tridents) and organising ‘sock drives’ for the homeless.

The Satanic Temple, founded in 2013, is an organisation which has exploded in popularity, now boasting thousands of members in chapters worldwide. Part political pressure group, part social activism and part performance art, the nontheistic ‘religion’ finds itself growing from a group of adhoc provocateurs into an association with meetings in which corporate buzzwords are deployed. It’s certainly amusing, but, like the organisation it documents, the film feels increasingly unfocused as time goes on.  This is more conventional in approach than some of Lane’s previous films, specifically Nuts!, the animated documentary about a charlatan who made a fortune from an impotence cure derived from goats’ testicles. But it shares with Nuts! a headline-grabbing central theme and a wry, light-hearted approach which should prove to be a winning combination both for festival programmers and for documentary specialist distributors.

The Satanic Temple was launched as an ironic publicity stunt – the satanists pledged their support for Florida governor Rick Scott, claiming that Scott’s bill in favour of prayer in public schools would make it easier for satanic children to observe their own religion. Although TST initially used an actor as a frontman, co-founder Lucien Greaves decided early on to step into the key role of spokesperson. Satan for him is a symbolic entity standing for rebellion against arbitrary authority. Satanism is a means to campaign for a pluralist society and a secular United States. It’s also a safe space for outsiders, particularly those with a penchant for wearing goat horn headdresses and fetish gear.

There’s a sense of genuinely creative mischief in some of the group’s satanic stunts, as well as a deft understanding of the workings of state legislature. TST staged a counter protest when the Westboro Baptist Church planned to picket the funerals of the victims of the Boston marathon bombing. They held a ‘pink mass’ at the grave of the mother of church founder Fred Phelps which, they claimed, had turned her into a lesbian in the afterlife. They argued that if a statue showing the Ten Commandments could be displayed at the Oklahoma State Capitol, they should be permitted to erect an 8 foot bronze sculpture of Baphomet, a goat-headed, winged icon. They petitioned to be allowed to start a Satanic After School Club, even going so far as to publish ‘The Satanic Children’s Big Book Of Activities’, all of which had the predictable effect of sending the conservative media into a froth of outrage.

Perhap more interesting however is the backdrop of ‘Satanic Panic’ in the 80s and 90s, out of which the current movement grew. Lane touches upon it, hinting that many lives of those caught up in what amounted to a latter day witch hunt were ruined. But there is a tantalising lack of detail. Another element which could have been explored in more detail is the schism within rival factions of the non-violent TST after one of them delivers a rabble-rousing speech suggesting murdering the president. The inscrutible Greaves toes the party line and expels the offending member. But you get the sense that he does so with regret, not least because as respectable face of Satanism, acting in a genuinely Satanic manner is no longer an option for him.