With her debut feature, Sahraa Karimi explores the lives of three Afghan women 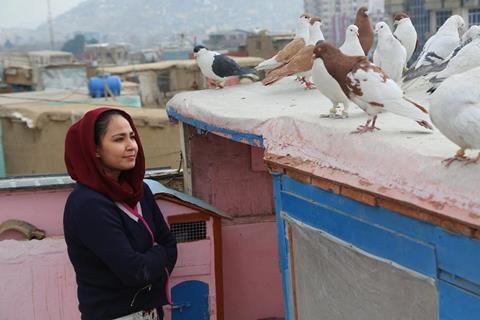 Promoted as the first independent Afghan film entirely shot in Kabul, Hava, Maryam, Aleysha has the feel of a warm throwback to the portmanteau films of post-War Hollywood (A Letter To Three Wives, Three Coins In A Fountain etc). Director Sahraa Karimi’s first fictional feature effectively uses the experiences of three Afghan women to illustrate a generation trying to loosen the grip of a suffocating patriarchy. Simple stories, sympathetically told, build into an engaging, accessible feature that will be welcomed at festivals and by international audiences hungry for an fresh insight into the lives of Afghan women.

Three lives are given equal weight in a film that begins with the story of Hava (Arezo Ariapoor). Little more than a servant in her husband’s house, the heavily pregnant Hava faces a day of chores with stoic dignity. She cooks and cleans, tends to an ailing mother-in-law and a demanding father-in-law who saves his affection for his precious caged birds. Hava’s husband is more concerned with entertaining his guests than her welfare. Her one comfort is their unborn child.

Television anchor Maryam (Fereshta Afshar) is a less servile figure. Incensed by an offer to model for a car dealership, she takes pride in her professional accomplishment. She has also decided to end a marriage marked by seven years of “lies and deceit”. While Hava’s story depicts a day of domestic drudgery topped by a quiet act of defiance, Maryam’s is a long dark night of soul-searching. Mostly set in her apartment and theatrical in tone, it resembles Jean Cocteau’s La voix humaine as Maryam spends her time on the phone rebuffing the persistent overtures of her husband and picking though the debris of her wasted youth. We learn that she too is pregnant.

Pregnancy shatters all the dreams and hopes of 18-year-old Ayesha (Hasiba Ebrahami), one of Hava’s neighbours. Intent on marrying for love, she has been abandoned by her boyfriend. She has agreed to marry her kindly cousin Suleiman and is driven to desperate measures to prove herself virgo intacta.

Sami Hasib Nabizada’s screenplay does lack subtlety. Suleiman is virtually the only male character who is not self-centred and callous. Dialogue too can seem very on the nose with Ayesha told “a house without a man is like a pot without a lid” and warned that “there’s nothing more important for a girl then to get married with a good reputation”.

Key images speak more eloquently than words as we witness Hava washing dishes outdoors in the grey chill of twilight, a forlorn Maryam clad in her wedding dress like a latter-day Miss Havisham or a furtive Ayesha hurrying along a narrow back street for an illegal abortion. Cinematographer Behrouz Badrouj captures a sense of Kabul’s bustling streets and sprawling cityscapes whilst the thoughtful production design adds to the distinctive sense of class and place in each story from Maryam’s fridge magnets of Marilyn Monroe and Audrey Hepburn to the way Hava expresses her creativity in the food she prepares.

The one-dimensional nature of some of the characters and transactions may grate but ultimately doesn’t detract from the cumulative emotional impact of a poignant triptych confronting the plight of women with no control over their bodies or their destinies.