'Hotel By The River': Locarno Review 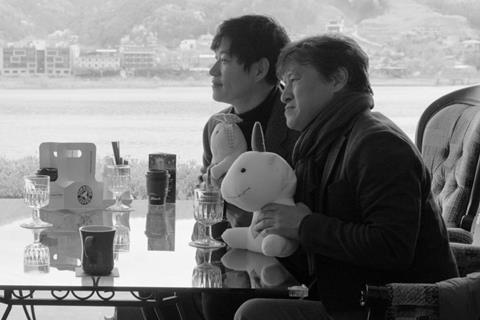 Hotel By The River

Hong Sang-soo weaves a typically delicate web of family ties, random connections and hurt feelings into Hotel By The River (Gangbyun Hotel). A wistful, slow-burner from the prolific director, it should attract extensive festival support following its Locarno world premiere.

The forlorn feel of Hotel By The River becomes increasingly endearing

Renowned poet Younghwan (Ki Joobong) has taken up residence at a hotel on the Han River. His melancholy mood is reflected in the atmospheric black and white photography by cinematographer Kim Hyungkoo that almost bleaches the setting dry. Despite seeming perfectly healthy, Younghwan is convinced that he may be about to die. He calls his two estranged sons to the hotel on a day that a heavy fall of snow blankets the area.

In the same hotel, Sanghee (Kim Minhee) has also sought sanctuary, mourning a failed relationship and nursing her wounds. Both of them are becalmed by the setting and the weather.

Initially a little stilted, Hotel By The River’s mixture of cryptic dialogue and static camerawork feels as if it has the makings of a Harold Pinter play. The notion of an artist reflecting on life’s disappointments and regrets also carries echoes of the Bergman classic Wild Strawberries (1957).

The tone gradually warms and the mood softens as Younghwan eventually confronts his sons Kyungsoo (Kwon Haehyo) and film director Byungsoo (Yu Junsang). Their awkward conversations are filled with evasions and half truths as Youngwhan struggles to construct a meaningful conclusion to their relationship. The theme of missed connections is most obviously expressed as the two men gaze at their phones whilst the father they cannot find is just a glance away in the grounds of the hotel.

Hong Sang-soo offers the sense of a calm, placid surface occasionally torn by someone daring to voice a jagged truth. Youngwhan may not be the gentle, philosophical soul that he appears to be. Kyungsoo has never revealed the true state of a marriage that his father regards as happy and contented. The dynamic between the father and his sons seems to rest on the certainty that nobody is ever prepared to rock the boat.

The contrast with Sanghee is not stark but is significant. She is joined by a friend Yeonju (Song Seonmi) as they pick over the bones of her relationship and the man who betrayed her. When Youngwhan meets them he seems more relaxed and at ease, finding it easier to confide in strangers than his own children.

The forlorn feel of Hotel By The River becomes increasingly endearing, and there is a strain of bone dry humour that lightens the mood. Key moments happen off camera and there is still a good deal that the viewer never discovers. We are left to fill in a lot of the blanks but there is enough wintry charm and understanding of human frailty to make it worth the effort