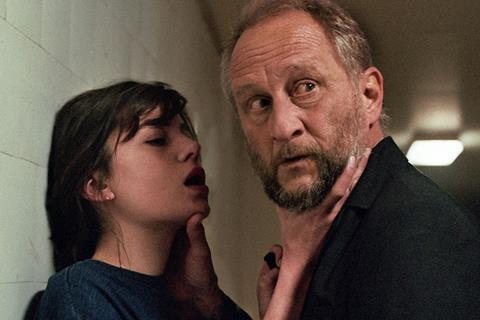 It’s a familiar premise: a stranger inveigles their way into the home and the heart of a family, only to reveal that they are not who they seemed to be, driven by motives rather darker than the minimum wage job providing dog care and child wrangling they’ve been hired to do. Director Fabrice du Welz acknowledges the familiarity of the narrative by embracing a whole host of domestic thriller and horror tropes and cliches, from the repeated use of Vivaldi’s ’Nisi Dominus Cum Dederit’ to the overhead drone shot of a family car driving through a forest, before permitting himself an enjoyably strident third act. But for all the fun stuff – the bracing madness and toxicity which finally erupts into the story – this is still one of the more conventional of his films so far, something of a let down after the nervy intensity of the adolescent obsession story Adoration.

Slickly atmospheric, even if it isn’t formally daring

Slickly atmospheric nonetheless, even if it isn’t formally daring, Inexorable takes its title of the last book written by Marcel Bellmer (Man Bites Dog’s Benoît Poelvoorde), a phenomenal hit which both launched his career and stalled it – he has struggled to complete a manuscript in the twenty-plus years since its publication. He lives with his wife and publisher Jeanne (Mélanie Doutey), highly strung daughter Lucie and the newest addition to the household, a big fluffy white rescue pup named Ulysse, in the huge, imposing chateau belonging to Jeanne’s late father. A chance encounter with nervy, socially awkward Gloria (Alba Gaïa Bellugi) reveals her affinity with both children and dogs, prompting Jeanne’s impulsive offer of a job. But, according to the tradition established by every film from Single White Female to The Page Turner to Joel Edgerton’s The Gift, the newcomer to the well-appointed home may well destroy it from within.

Soon, Inexorable also comes to refer to the slow creep of Gloria’s malign influence, as she splinters the core of the family, driving wedges between its members, engineering the sacking of other staff and courting the affection of the neglected daughter of this glittering literary power couple. She’s a difficult character on which to get a handle, presenting a combination of cowed diffidence and sly manipulation. And if Bellugi struggles in her attempt to bring the disparate aspects of the character into a coherent whole, the fault is perhaps more with the writing than it is with her performance.

Du Welz makes effective use of the film’s location, a vast and imposing pile lit with stripes of dusty sun and intermittently faltering electricity. Marcel, ensconced in the study of his late father-in-law, feels the weight of expectation and his wife’s family legacy ever more keenly. And the camera spirals woozily around the dramatic central staircase which forms the core and the focus of the building – a structure which, we are pointedly informed, is unsound. As the story gains savagery, so the muted, tasteful palette is replaced by saturated strident crimson and orange.

But while blood is shed and tempers are lost, the most chilling moment which captures Gloria’s insidious influence comes with a blast of death metal and a ‘performance’ during what should be an innocuous children’s party. It’s a superb scene, a glimpse of what might have been had the filmmakers chosen a less well-trodden route to explore this story.