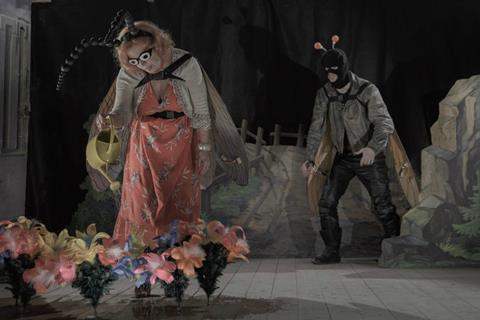 In what he describes as a ‘foreword’ to this film, director Jan Svankmajer — talking straight to camera and fluffing his lines repeatedly —  admits that he doesn’t actually know what this, apparently his final picture, is about. Insect, which was crowdfunded via Indiegogo, is the result of what the veteran animator and filmmaker describes as a process akin to ‘automatic writing’, and brings a meta twist to the 1922 satirical work, The Insect Play, by the brothers Karel and Josef Čapek.

Švankmajer has always been fascinated by the repulsive, animalistic side of human nature

The success of the crowdfunding initiative suggests that there is still a loyal fanbase for Švankmajer’s distinctive and idiosyncratic work. That said, this is unlikely to win over new audiences. The Švankmajer name and reputation should ensure some festival interest; it might, however, present something of a challenge for theatrical distribution, not least because many of the supporters of the crowd-funding campaign will automatically receive the film, either on DVD/BluRay or by download.

The film sees an amateur dramatic troupe rehearsing their version of the play, harangued by the highly strung director (Jaromír Dulav), who also takes the role of Mr Cricket. In addition to Švankmajer’s trademark macabre stop motion animation, Insect is punctuated by behind the scenes footnotes in which the director draws back the curtain and reveals his methods. Even with the breathing space provided by Švankmajer’s interjections, the stridently surreal tone of the picture is rather wearing.

Švankmajer has always been fascinated by the repulsive, animalistic side of human nature. So this misanthropic play in which ‘bugs behave as human beings and people behave as insects’ seems a good fit for his vision. Even so, some of the imagery is unsettlingly savage. It’s not so much the shots of swarming cockroaches which are repulsive, rather the extreme close ups of the cast. Švankmajer hones in on eyebags, quivering jowls, lips slicked with saliva and, in one case, flecked with vomit. He makes a persuasive case that humans are every bit as disgusting as bugs.

The rehearsal itself is chaotic. The actor playing the dung beetle (Jirí Lábus) arrives late and covered in panicky sweat. His line reading is so agonisingly inept that the director storms off set, finally sending the hapless beetle to the bathroom to learn his lines. The bathroom, incidentally, is exactly the kind of smeared and filth-caked hell hole you would expect in a Jan Švankmajer film.

Meanwhile Rose (Kamila Magálová), the actress playing Mrs Cricket, and also the wife of the director, is carrying on a not-at-all-covert flirtation with the Wasp, Vaclav (Jan Budař). The parasite (Norbert Lichý) works his way through a suitcase full of beer and the larva (Ivana Uhlířová) knits neurotically.

The animation nods towards Kafka, with various characters metaphosising into their insect counterparts and back again. A dung ball grows to immense proportions and terrorises the actor playing the dung beetle. Insect also reveals the processes by which all of this is achieved, together with insights into foley sound effects (chicken carcasses feature heavily) and bleeding stab wounds. It feels rather like a magician revealing the secrets of his tricks; or perhaps, more appropriately, a true original passing on his techniques to the next generation of surrealist stop motion animators.