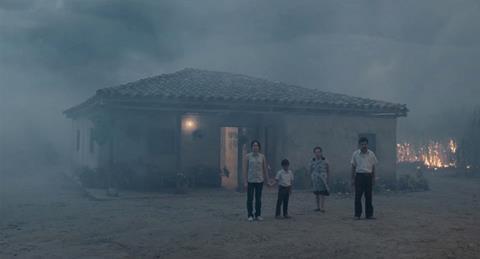 Winner of three prizes at Cannes including the prestigious Camera D’Or awarded to a first-time film-maker across the whole festival selection, Cesar Arcevedo’s Land And Shade (La Tierra Y La Sombra) is a beautifully-shot, if artistically uncompromising, film about the plight of peasant sugar cane labourers on a ruined plantation as told through one decaying family unit.

The house is hermetically-sealed against the dust, with no windows allowed open and no light to shed on Gerardo’s last days.

Boosted by its prize haul – it also took the SACD prize and the France 4 Visionary Award at Critics’ Week – this slow and occasionally moving drama has already secured distribution in Italy, Latin America and France through sales agent Pyramide. Its careful compositions and deliberate framing will certainly attract attention from festivals worldwide, although Land And Shade is a tough commercial prospect outside its co-production territories. Arcevedo, who has won prizes at Rotterdam and Berlin for his short films, marks himself out as a name to watch, even though his pace may be too glacial for some to warm to.

Land And Shade starts out with a beautiful long shot in which an old man, Alfonso (Haimer Leal) walks down a dirt track, surrounded by sugar cane, towards the camera until he is blasted with dust and decay from a lumbering lorry (this sequence is repeated later in the film, to great effect). He is returning to the home – and bitter wife Alicia (Hilda Ruiz) – he abandoned years ago. Alfonso’s son Gerardo (Edison Raigosa) is dying from lung disease, a direct result of working in the burning cane fields, and Alfonso has come to help out.

Ash falls on the family like snow and the plantation fires ravage the landscape, yet Alicia still stubbornly refuses to leave her home. Alfonso’s daughter-in-law (Marleyda Soda) and six-year-old grandson (Jose Felipe Cardernas) clearly need to abandon the homestead before it kills them, yet Gerardo will not leave his mother. The house is hermetically-sealed against the dust, with no windows allowed open and no light to shed on Gerardo’s last days.

Meanwhile, in a less-developed sidebar, sugar cane workers go unpaid and uncared-for in a brutal economic environment, but a threatened strike seems futile and may cost the family even further.

Some of Arcevedo’s compositions call to mind The Good Earth, his family captured in almost heroic-profile as the ravages of modern development take their toll. A key element is the giant tree in their yard under which moments of peace play out - Gerardo emerging from his shuttered room to play with his father and sun under its shelter. Arcevedo is certainly as preoccupied with image as he is content and it is perhaps the individual frames and tableaux which linger on past this resolutely-downbeat, emblematic story.

Alfonso sweeps ash from the hearth, the rugged faces of the cane workers are silhouetted against the looming cane and apocalyptic fires - there’s plenty to take from Land And Shade, courtesy of Arcevedo’s cameraman Mateo Guzman. The cast, mostly non-professional, prove competent, with the young grandson providing the only moments of lightness in the piece.