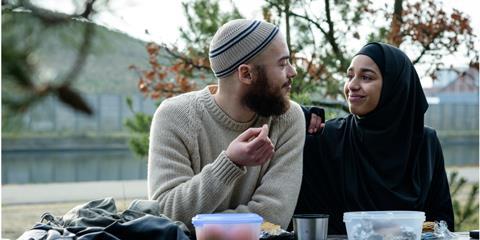 Be careful what you wish for. In Layla M, a disillusioned young Muslim woman grows to feel that there is no longer a place for her in an increasingly intolerant Europe. The decision to abandon her family and start a new life in the Middle East is fraught with challenges to her naive notion of finding a place and a faith where she feels that she belongs.

There is a fatalistic arc to Layla M.

Mijke de Jong’s exploration of the issues surrounding radicalisation and identity is one of a number of current films on the theme (Heaven Can Wait etc) but is distinguished by its intelligent approach to complex matters, the polished visuals of cinematographer Danny Elsen and a knockout central performance from newcomer Nora el Koussour. That combination and the timeliness of the topic should make Layla M a regular fixture of the festival circuit and guarantee some theatrical interest.

Nora el Koussour’s Layla Mourabit is a fantastically stroppy, compelling character. A Dutch/Moroccan teenager, she is a fiery, opinionated figure. Encountering casual racism on a daily basis, she is outraged by a father who never fights back and is ashamed by her defiance. He merely wants her to study hard, keep out of trouble and become a doctor.

There is a very striking sense of Layla as someone whose voice is not heard in her home, her school or her city of Amsterdam. There is also a sense of how eagerly she embraces her status as an outsider, becoming more devout in her prayers, studying the Quran, attending demonstrations and never giving an inch in the defence of her position. She is spirited and would probably start an argument with her own shadow. She also tends towards the insufferable in her righteousness which makes her all the more interesting.

The process of Layla becoming open to radicalisation is convincingly depicted as she abandons friends who mock her decision to wear the full hijab and finds it intolerable that so few people seem to care about what is happening in Syria. Even though you fear where this is heading, the viewer can fully appreciate what she is feeling.

Layla is drawn to the charismatic jihadist Abdel (Ilias Addab). Skype chats and supportive words fuel her starry-eyed romantic notions. When her life in Amsterdam becomes intolerable, she is more than willing to become Abdel’s bride and follow him to the Middle East and a new life in which her role as a docile wife leaves her with similar feelings of being denied a voice.

One of the admirable qualities of Layla M is the way it strives to find the good and bad in each character. There is a genuine affection in the relationship between Layla and Abdel, especially in the moments when they are alone together. There is a charming scene when they slowly dance in a hotel room  and later they look out  on a starry sky and the promise of their new life, both intimate moments beautifully captured by Danny Elsen. The fact that Abdel will come to see Layla as someone who disrespects him and fails to fulfil her duties does not diminish his earlier fondness.

There is a fatalistic arc to Layla M. There is a distinct break between life in Amsterdam and life as a fugitive. We know this is unlikely to end well but there are still unexpected details that emerge and Nora el Koussour’s performance to carry the narrative. Her big, yearning eyes, the hot flashes of her anger and the tears of disappointment all convey the emotional turmoil of an incredible journey.