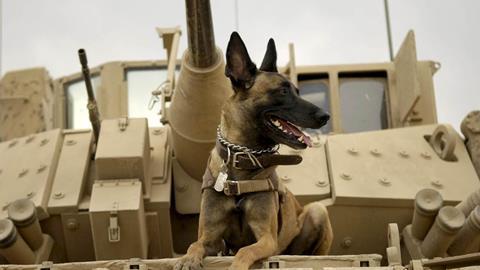 Call it Lassie Coming Home. Or maybe, American Sniffer. Mixing dog-centric action with war veteran-themed drama and the odd adolescent life lesson, wholesome family adventure Max is a genial if somewhat old-fashioned tale that’s too clunky to transcend its genre(s) but effective enough within its own limited emotional range. Home screens seem like its natural outlet, though theatrical might pay off modestly for distributor Warner and producer MGM (maker of the original Lassie movies).

Though there’s clear respect for military (as well as family) values running through the film, Max’s religious and patriotic elements are relatively subtle.

With patriotic July 4 celebrations coming up, Max could appeal to Middle America and the faith-based audience when Warner opens the film in the US and Canada on June 26. Outside the US, the lack of star names, the military theme and the (fairly reserved) US flag-waving will probably be limiting factors at the box office.

The title character is a Belgian Malinois (a good-looking but not overly cute Alsatian-like breed) employed by the US Marines to sniff out danger in Afghanistan. When his Marine handler Kyle is killed in an ambush, the traumatised dog is shipped back to the US and, just before being put down because of his aggressive behaviour, is taken in by Kyle’s grieving family.

As scripted by Boaz Yakin (Prince of Persia: The Sands of Time) and Sheldon Lettich (Rambo III), and directed by Yakin, the film sets its characters on some pretty familiar arcs. Max, made the responsibility of Kyle’s rebellious teenage brother Justin, is almost written off but eventually bonds with his new human master and saves the family from another tragedy. Justin (played by the promising Josh Wiggins, from Sundance 2014 entry Hellion) sorts out his real friends, begins to work out his antagonistic relationship with his father and, through Max, finds a feisty girlfriend (newcomer Mia Xitlali).

Kyle and Justin’s ex-Marine dad (Thomas Haden Church) comes to see his younger son in a new light. And Kyle’s Marine buddy (Luke Kleintank, from TV’s Bones) turns from apparent good guy to bad, initiating the gun-toting, backwoods pursuit that takes up much of the film’s final act. (Disappointingly, Kyle and Justin’s mother, played by Gilmore Girls’ Lauren Graham, has no arc to speak of.)

Yakin, best known as a director for Remember the Titans, tells the story efficiently and straightforwardly, though there are times when the pacing wavers and the staging and performances feel a little stilted. Though there’s clear respect for military (as well as family) values running through the film, Max’s religious and patriotic elements are relatively subtle.