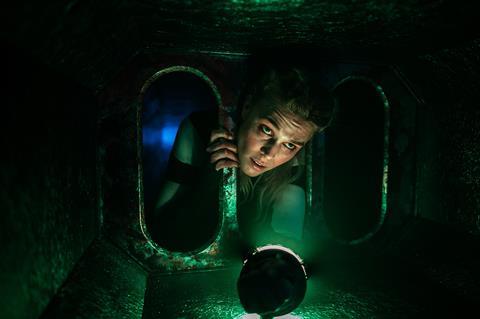 This high-concept sci-fi horror makes up in claustrophobic tension what it lacks in logic. A young woman, Lisa (Viking’s Gaia Weiss), finds herself imprisoned in a booby-trapped network of metal tubes. A count-down clock locked onto her wrist gives her warning of impending threats, which include skin-melting fire balls, acid baths and an unstoppable psychopath, bent on her destruction. The whys and the hows of all this don’t bear much scrutiny, but the combination of first-rate sound and production design, a committed central performance and some viscerally grisly special effects makes for an enjoyable genre romp.

The second feature film from writer/director Mathieu Turi (Hostile), Meander premiered at Sitges before heading to Macao. Similar in tone and themes to Vincent Natali’s Cube, it should prove attractive to distributors in the market for smart genre material: it has already been picked up by Altitude in the UK and Alba Films in France. The film’s main issue is its misleading title: Meander evokes images of leisurely Sunday afternoon drives - not a breathlessly taut battle for survival in a network of devious and deadly air conditioning ducts.

A brief opening sequence sets the scene and the characters. Lisa, introduced to the audience as a prone figure lying on a deserted road, is wrestling with still-fresh grief over the death of her daughter. She is offered a lift by Adam (Peter Franzen), a grizzled, dishevelled man with a distinctive cross tattooed on his hand. Alarm bells might as well start sounding as soon as he opens his mouth and, sure enough, when the description of a suspect wanted for murder crackles over the car radio, the distinguishing feature is a cross tattoo on his hand. Adam slams on the brakes and Lisa’s head hits the dashboard. But when she wakes, Adam is nowhere to be seen. She’s dressed in a high tech catsuit, her hair is braided. And she is imprisoned in a metal box.

A door slides open and the challenge begins. Lisa must scramble through the tunnels as fast as possible, squeezing through impossibly narrow gaps and learning the rules of this deadly game as she goes along. She quickly realises that the counter clock on her wrist warns of imminent danger. And the discovery of the roasted and decaying remains of a former contestant reveals that the consequences of failure are messily final.

The production design of the maze in which Lisa finds herself makes creative use of the limited space and materials available. But it’s in the sound design that the horror really plays out most effectively – all fingernails scraping and unseen mechanisms clanging outside of the frame. The peril that Lisa faces is magnified with each metallic groan and creak.

And of all the peril she faces, the most deadly is another person, also trapped within the same giant puzzle. They find themselves pitted against each other, fighting for the space which will offer protection from the next fireball. The tattoo of a cross and the murderous inclinations identify the man as Adam, the killer turned victim in a larger death trap.

What does it all mean? Who is watching? Is it an allegory for Lisa’s grieving process? Is she dead at the film’s opening? The audience is left to make its own mind up. But such is the relief when we finally emerge from the metal tubes, it hardly matters whether or not it all ties up neatly at the end.