A surreal portmanteau set on or around a Miami speedboat 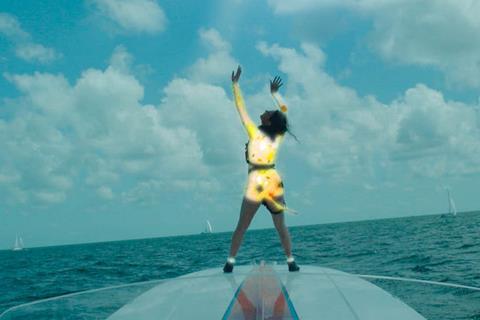 Created by a Florida-based film collective known as the Borscht Corporation, this experimental feature is an assemblage of short films loosely tied together by their Miami location and a speed boat. Although a number of highly talented and imaginative young filmmakers contributed to the overlong two-hour project, including The Daniels (Swiss Army Man) and Terence Nance (Random Acts of Flyness), the overall project repeatedly drifts off course. A couple of the pieces have some good laughs or inspired trips of surrealism, however, and would most certainly benefit from being screened separately as solo short films rather than as part of this lark.

…Strange stories, which all, loosely or more directly, revolve around the same speedboat

The overall film anchors its stories around a key figure who opens and closes the film: a real estate developer named Jim Cummings who, as part of his pitch to investors in the Jim Cummings Luxury Tower, offers a brief, entertaining and perceptive history of Florida—one that is built from its earliest days on lies, speculation, and advancing waters that continue to threaten its lowlands and coastlines.

And then the strange stories, which all, loosely or more directly, revolve around the same speedboat, begin. The first, a kind of origin fable, sets the tone for the mostly surreal vignettes that will follow: after the 2008 recession, a young rich Miami man can’t afford the payments on his monster pick-up truck and a yellow-striped speedboat called Lay ‘n Pipe, so the two vehicles end up in a junkyard. There, they form a romance, hit the road together, have a baby speedboat with big wheels (Lay ‘n Pipe 2), and then go on the run from the police.

This first film presents one of the key challenges of the project: How to make films about an inanimate object? (One of the shorts even concerns itself with a woman who identifies herself as an “objective sexual” who wants to have an affair with the boat.) But the best of the shorts don’t even try—rather, focusing on central characters where the boat is simply used as a boat.

For example, there’s one truly weird and absorbing film, presumably directed by Nance (based on the subject matter), where a large black man who can’t pay the mortgage on his body is then taken away onto the speedboat by a group of henchman; inside the hidden-away reaches of the vessel, the man then fights back to preserve his original figure. There are one or two other highlights: a creatively choreographed modern dance set-piece, with people acting out Florida animals amidst the everglades; and a more standard comic narrative short about a reckless uncle taking his nephew on a joyride.

But one of the other central problems with Omnibus is a lack of thematic unity. With the filmmakers presumably given free rein to tackle their speedboat stories in whatever ways they choose, the overall film doesn’t cohere. There appear to be some coincidental threads—stories about lying or concerning technology–but there are others that drift into different terrain, such a one-note shorts about Cuban refugees using the boat to get to the US or a Leviathan that threatens a deep-sea diver.

To be fair, there is at least an attempt to tie the stories together through the figure of Cummings, his ambitions to build his tower, and occasional TV news reports of an impending hurricane. But when we finally get to the presumable climax, with Cummings in the eye of the storm, facing off against a dolphin-man beast (voiced by Sundance founder Robert Redford, whose grandson contributed to the project), Omniboat has already stalled out.