'One Nation, One King': Venice Review

The early years of the French Revolution, with an all-star cast 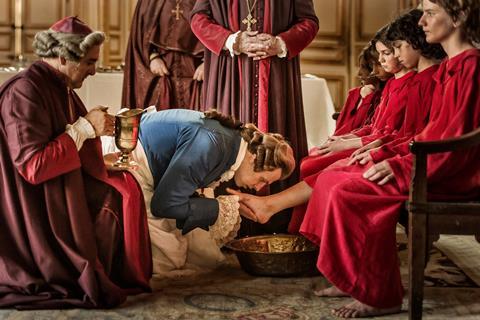 ‘One Nation, One King’

Pierre Schoeller’s account of the early years of the French Revolution, told largely from the point of view of the working men and women who fought for change, is a sturdy, intelligent, if only occasionally stirring historical drama. Despite a great deal of talk, it may flummox those without a decent grasp of the shifting sands of this tumultuous moment in French history. Nevertheless, with its questions about national identity and emphasis on the women of the revolution, it feels like a timely film that may well chime with audiences.

The passion comes from the performances

One Nation, One King opens with the storming of the Bastille in July 1789, after which the newly created National Assembly grapples with the question of how much further to take the revolution, inexorably moving towards the formation of the Republic a few years later – and with that, of course, the small matter of what to do with King Louis XVI. Most will know how that ends.

The film involves very little action. The taking of Bastille is related after the event, the Parisian poor basking in their surprise success, and other riots and confrontations similarly take place off screen. There is one exception, in which continued disagreement about the king leads to a rally and the massacre of demonstrators ordered by the Assembly itself – a bitter pointer towards the schisms that will remain within the revolutionary enterprise.

For the most part, Schoeller’s film involves talk and debate. Strange as it may seem, there’s something reminiscent here of Robin Campillo’s HIV drama 120 BPM. The 2017 film’s structure is dominated by discussions amongst activists on how best to campaign for effective action against the epidemic, with people’s different personal experiences shaping their points of view. Here, the “people”, meaning working class and the poor, are seen to be largely more inclined to drive the revolution forward until they win palpable rights – and actual food on the table – than many of the privileged and periwigged classes who have assumed control of the assembly.

“Without Louis, the edifice crumbles,” says one assembly member, revealing the practical and emotional ties to the monarchy, particularly felt by aristocrats and others with more to lose. In contrast, the lawyer Robespierre (Louis Garrel) is among those law-makers prepared to cut the tie, quite literally; and many of the working-class protagonists, including a glassblower known as L’Oncle (Olivier Gourmet) and a washerwoman, Françoise (Adèle Haenel), are with him.

At the same time, women, seen here as prominent forces on the front lines of the fighting, have no rights even to speak. Such contradictions ensure that the film has a nuance appropriate to a movement that was never a simple road to emancipation. Schoeller doesn’t direct with any of the panache associated with French period drama, seemingly unwilling to distract from his film’s serious intent to reveal the people and the ideals at the heart of the revolution. This results in a certain stiffness, and it a pity, too, that the poverty of the Parisian commoners is disconcertingly airbrushed.

The passion comes from the performances. Aside from the inestimable Gourmet whose character is driven by simple, directly-expressed necessity, the biggest impressions are made by women: Izïa Higelin, Céline Sallette (whose singing often rouses her character’s comrades and the film itself) and in particular Haenel, whose Françoise loses a child through malnutrition, speaks up for women’s rights and infuses her drifter-lover (Gaspard Ulliel) with her revolutionary fervour.

Garrel is a thoughtful Robespierre, Laurent Lafitte a proud Louis, but in keeping with Schoeller’s agenda both characters are marginal. Some contextual captioning wouldn’t have gone amiss, without which, for example, some audience members will be unaware of the former’s ironic role in the Reign of Terror, as the revolutionaries started to turn on themselves.