‘One Of These Days’: Berlin Review 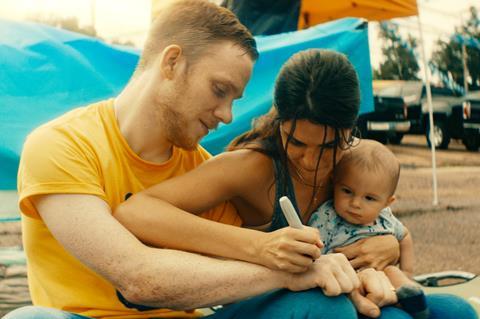 ‘One Of These Days’

The latest film to train a lens on the wealth gap, One Of These Days looks at economic desperation, rebranded as mass entertainment, in a tragicomic drama which is loosely-based on real life. US-based German director Bastian Gunther takes on a Texan tradition, an annual ‘Touch the truck’ endurance test in which twenty contestants compete to be the last one standing, with one hand resting at all times on the prize: a brand new pick-up truck. While the original contest was discontinued after the death by suicide of one of the contestants, it’s likely that this empathetic and sensitively acted account of people struggling to (literally) get their hands on a piece of life-changing good fortune will resonate with audiences both at further festivals (a slot at SXSW follows the Berlin premiere) and via a streaming platform or arthouse theatrical release.

First introduced to the wider public through S.R. Bindler’s 1997 documentary Hands On A Hardbody, the idea of the extended endurance contest exerted sufficient fascination to support both a stage musical spin-off and a British television series, Touch The Truck. Here, the contestants and the sparking tensions between them are threaded together with a finely sketched portrait of the perky PR woman Joan (Carrie Preston, excellent) whose veneer of chipper positivity gradually cracks as the contest unfolds and tragedy looms.

Guther sets the tone for the film early on, with a juxtaposition of absurdity and pathos, which is delicately balanced throughout. ‘Bubba’ Boudreaux (Douglas M. Griffin), the owner of the car dealership which hosts the annual contest, records an amateurish television slot and breaks out into rheumatic robotics. “Uh, I’m a selling machine,” he wheezes. It’s a comic moment. However the musical score which follows is saturated in sadness, all wistful flutes and melancholic harp.

But nowhere is this tonal contrast more evident than in Preston’s performance as Joan. Flintily upbeat, she’s zealous in selling the message that the competition is “fun”. She paints it as a community party, with free drinks and live music to compliment the spectacle of twenty individuals sweating out their self-respect in the sweltering heat. But Joan’s glassy, automatic smile doesn’t quite hide the fact that she’s alone for the first time – her daughter has left for college – and she’s drowning. Nevertheless, glimpses of Joan’s life offer some respite from the unnatural tensions which swim around the weary minds and bodies drooped around the truck.

While the slow build of pressure during the competition necessitates a fair amount of time spent in the parking lot, the dramatic limitations of a group of people glumly standing around a truck does cause the picture to drag at times.

Of the contestants, it is unassuming family guy Kyle (Joe Cole) who fairly rapidly becomes the focus of the story. He’s the target of the mind games played by the alpha males who glower across the flatbed; he’s just naïve enough to believe that failure to win is a failure as a husband and father. Also clinging onto the dream is a man who has rigged up a catheter so that he doesn’t even need to take toilet breaks; a woman who stoically recites passages from the bible and bleats whenever anyone swears; a pair of racist rednecks and Kevin (Jesse C Boyd), an out-of-towner who has a secret technique for winning.

It’s competent and bleakly entertaining storytelling – sound design strikes a warning with the subliminal sounds of bodies strained to breaking point; the camera deftly traces the fault lines in the slumped figures of the contestants. And while there are some pacing issues, an unexpected final structural device, which rewinds the film to a moment before the contest tainted everything, is poignant and effective.