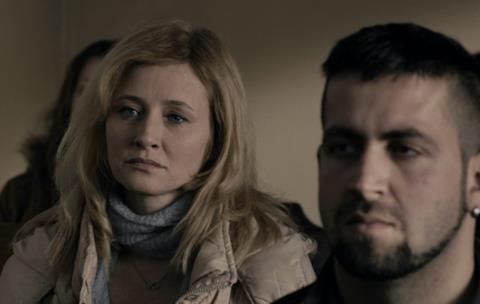 A father relocates his family to a new life running a guesthouse high in Romania’s Apuseni mountain region. But there he finds himself caught up in a fight for territory between local gangster Zoli and the lawmen who are waging a fruitless battle against illegal logging in the region. What’s more, Zoli starts to make claims on the family as well as the land on which they are living.

A Hitchcockian orchestral score adds to the sense of mounting threat

An effective score and, particularly, the brooding photography from acclaimed DoP Oleg Mutu (4 Months, 3 Weeks and 2 Days, Beyond The Hills, In The Fog) do most of the talking here. In this outlaw country, people soon learn to keep their mouths shut. This taut and atmospheric thriller should enjoy positive word of mouth on the festival circuit, and could, with critical support, enjoy a modest theatrical life in territories with a proven appetite for Romanian New Wave cinema.

For his third feature, Crisan updates a classic novella, The Mill Of Good Luck by Ioan Slavici, to comment on the ongoing environmental issue of illegal logging in Romania’s forest regions.

Having spent a long period working abroad, chef Lucian (Andras Hathazi) and his wife Andra (Rodica Lazar) are not fully aware of the tensions that swirl through the Four Peaks region like fog. But the name Zoli floats in the air, mentioned both by the thugs who work for him and the forest rangers who have no hope of catching him, long before the man himself arrives at the buzzing restaurant that the couple now manages.

Lean, intense, charismatic, Zoli (Zsolt Bogdan) is not the kind of man you turn down when he asks a favour. Bullish and heavyset, Lucian stews silently and violently butchers a sheep carcass in the kitchen as Zoli borrows his money, buys presents for his son and dances, cheek to cheek, with Andra.

The striking widescreen vistas of the mountains contrast with Lucian’s restricted space within the guest house – the kitchen, the only place which remains his domain, and the small room upstairs where he watches television in bed. Zoli, meanwhile, dominates any space he enters. He hosts riotous parties in the restaurant, while Lucian glowers from the kitchen.

Lucian is a man of few words and he chooses to play his cards close to his chest when the police start to ask questions about Zoli’s actions. However when he realises the full threat that the man poses to his life, Lucian blurts all he knows to officers who seem to have lost interest in the case.

Sound is crucial to the film’s oppressive atmosphere. A Hitchcockian orchestral score adds to the sense of mounting threat, but it’s the persistent warning bark of the family’s dog that raises the anxiety levels, both for the characters and the audience. The film’s climax plays out in near silence, however – during Lucian’s search for answers after having been sent on a wild goose chase to Cluj.