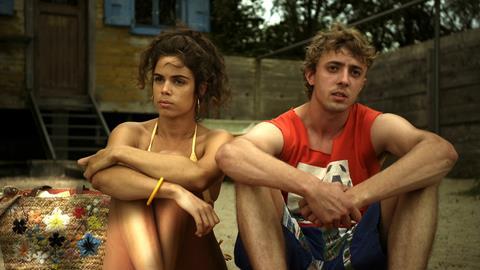 About all we can be absolutely certain of in First Name: Mathieu is the protagonist’s name – and the very Swiss character of Lionel Baier’s short feature. The film is one of four in Swiss TV quartet Shock Waves, self-contained dramas based on real-life crime cases; the other directors involved are Ursula Meier (Sister), Frédéric Mermoud (Moka) and Jean-Stéphane Bron (The Paris Opéra). On the evidence of Baier’s film and Meier’s Diary of My Mind, both of which premiered in Berlin’s Panorama Special section, the series is less about shock in any sensationalist sense than about the repercussions of violent events.

First Name: Mathieu comes across as a jigsaw in which certain pieces grab out attention, but aren’t easily integrated into a whole

Baier, who doubles as producer on all four titles, markedly shifts gear here from his 2015 feature, euthanasia-themed comedy Vanity, to offer a fractured, elliptical, enigmatic depiction of the trauma experienced by a young man who undergoes sexual assault. Although accomplished and stylistically distinctive, the film is unlikely to make its own shock waves beyond the TV series, although it could win some festival slots in tandem with Meier’s film.

Although the film is fictional, it is based on the case of Michel Peiry, who committed a number of rapes and murders in Switzerland in the 1980s. Set in 1986 in the French-speaking canton of Vaud, Baier’s story begins with a shot of a clearing at night. Against a series of stark images of telegraph wires, we hear a police report that 17 year-old Mathieu Reymond (Maxime Gorbatchevsky) has been brutally raped, but is the only victim to escape murder by the perpetrator.

Physically and emotionally scarred, his head partly shaved, Mathieu returns home from hospital and, although he stays away from school, attempts to reintegrate himself into home life with his parents (Ursina Lardi, Pierre-Isaïe Duc) and narcissistic brother Mica (Mickael Amman), who maintains a cautious distance.

Meanwhile, police inspector Jotterand (Michel Vuillermoz) gently coaxes Mathieu into searching his memory – resulting in abrupt flashback images of his ordeal – and helping an identikit artist complete an image of the rapist. Jotterand is fascinated by a stray clue: the key to a hotel room where Mathieu says he planned to spend the night with girlfriend Sarah (Nastassja Tanner), who in one striking departure from strict realism, is seen in the room talking directly to camera.

This is not the only point at which Baier subverts the ‘true crime’ realism of his drama: the film’s strangest moment is the revelation of a purring lynx crouched under Mathieu’s bed. The film is very much a psychological portrait with Pauline Gaillard’s fragmented, rather Roegian editing style evoking Mathieu’s mental state – a condition given vivid expression when Mathieu lets off steam by smashing his parents’ crockery, bonding with Mica as his brother tentatively joins in.

This is also a study of a certain aspect of Swiss society, with Baier suggesting that the natural culture is desperately attached to normal appearances at all costs. Male rape clearly troubles this community deeply, as we sense when Mathieu rides on his father’s truck. In a series of slow-motion glides past manicured exteriors, we see local residents cautiously waving at Mathieu, then looking borderline hostile, before a scowling boy on a bike gives him the finger; significantly, one thing that stands out in this sequence is a fluttering Swiss flag.

First Name: Mathieu comes across as a jigsaw in which certain pieces grab out attention, but aren’t easily integrated into a whole: for example, Mathieu’s and Sarah’s fantasy of meeting up in Australia prompts a sudden, knowingly-jarring still shot of Ayers Rock. Super-cleanly shot, the film often signals its visual artifice – a shot pulling ever closer into Mathieu’s eye, a direct overhead shot of a car negotiating road markings – but this can sometimes feel like an arbitrary stylistic exercise. Baier is good, however, at dropping in sharp, telling details: like a cutaway that signals the Inspector’s noticing Mathieu’s mother’s bare heels with approval.

What unifies the film is its strong acting – with newcomer Gorbachevsky making a powerful impression as the isolated but rebellious Mathieu who, it’s implied, has secrets that he won’t let anyone in on, let alone the viewer. And French stalwart Vuillermoz gives a delicate, characterful performance as the tactful but incisive investigator.