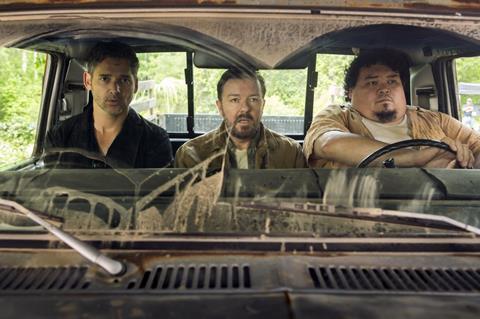 Just as it’s possible to damn a movie with faint praise, so it’s possible to praise a movie by damning it faintly. “Tame”, “tepid”, and “pale” are the kinds of adjectives elicited by Ricky Gervais’s made-for-Netflix title Special Correspondents, the story of a hotshot radio reporter and his wimpy sound engineer who, sent to cover a South American war, instead transmit their bulletins from the building opposite their station in Queens, New York. Yet Gervais is too smart an ironist not to have calculated that he was making a “smile wanly” comedy rather than the “laugh out loud” variety. Perversely pleasurable, it works on its own self-conscious terms, though not all audiences will appreciate its English brand of sad-sack humour.

Denuded of gravitas and serious geopolitical content, Special Correspondents attempts to deconstruct such war correspondent classics as Under Fire, The Killing Fields, and Salvador

Eric Bana plays the reporter, Frank Bonneville, a long, tall streak of arrogant, conceited machismo. He’s good at pretending to be a detective and breaking the yellow tape of Manhattan crime scenes – dragging his nervous co-worker Claire Maddox (Kelly Macdonald) behind him – to scoop every other journo in the city. He’s also good at picking up women like the sexually frustrated, fame-hungry Eleanor Finch (Vera Farmiga). Having laid eyes on Frank at an event, she whisks him back to the apartment she shares with the milquetoast hubby she loathes. She’s not the first woman to disdain a partner who collects superhero action figures and comics.

Said husband, Ian, is played by Gervais – incarnating here his sheepish, unworldly nerd persona rather than his smarm-ball or his snark. For all his inadequacies as a real man, Ian is a very kind one, according to Claire, who adores him. To Frank’s credit, he doesn’t know Eleanor is married when he sleeps with her (she’d removed her wedding ring) and only later gleans she is wedded to his colleague. He has as little regard for Ian’s effectiveness as Eleanor but considers him a competent enough technician to bring to Ecuador when their boss Geoffrey (Kevin Pollak) assigns him to report on a rebellion.

After Ian accidentally throws away their plane tickets and passports, they hole up in a room above the eaterie run by his good-natured friends Brigida (America Ferrera) and Domingo (Raul Castillo). The cicadas, gunfire, and helicopter sounds with which Ian backgrounds Frank’s extemporised reports convince Geoffrey and the anxious Claire that the guys are dodging bullets in the war-torn rainforest. To get themselves out of a spot, they then circulate a rumour they’ve been kidnapped by rebels.

This is the cue for Gervais to drop one of his biggest bad-taste bombs yet. For a video he subsequently disseminates to news organisations, Ian gets the Hispanic couple to dress as Ecuadorian equivalents of ISIS executioners while he and Frank – registering no fear whatsoever – pose as orange-suited prisoners kneeling before the camera. His accompanying plea for his and Frank’s lives is equally deadpan. It’s likely Gervais will catch some flak for sticking this toe-curling bit of satire in one of his most benign outings, though some will argue he should never have filmed it in the first place. Nothing is sacred in Gervais’s view.

He seems less interested in the legal ramifications of inventing news than exploring, albeit vaguely, the idea that the boundaries between real events and virtual forms of reality are dissolving. Moral dissimulation proves a clearer target here. There’s an amusing bit of business where the faithless Eleanor plays the loving wife publicly and milks Ian’s predicament for self-glorification. She composes an execrable patriotic song that tops the charts and is soon appearing on talk shows, beaming from magazine covers, and wearing army fatigues in fashion shoots.

Denuded of gravitas and serious geopolitical content, Special Correspondents attempts to deconstruct such war correspondent classics as Under Fire, The Killing Fields, and Salvador. Simultaneously, it sidesteps the courage of reporters in the field by empathising with Ian – a throwback to Bob Hope’s cowardly heroes – rather than Frank. Presumably Gervais’s theory is that the multitudes of nice, trivial men in the world deserve screen time as much as the warriors and game-changers.

Special Correspondents is visually functional. The Queens street scenes are reasonably flavorsome, as are overhead shots of an Ecuadorian village empty except for a chicken or two. The low-mixed score helps provide rhythm.