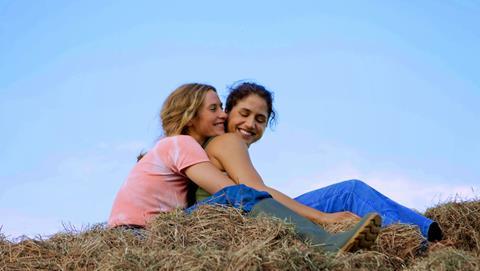 Tumultuous social change is reflected in, and challenged by, intense personal experience in Summertime (La Belle Saison), an exuberant autobiographical piece from writer/director Catherine Corsini set in 1970s France. The mixture of political activism, grand gestures and poignant romance carries echoes of Matthew Warchus’s Pride whilst the frank depiction of the central lesbian love-affair is sure to invite comparisons with Blue Is The Warmest Colour (La Vie D’Adele). Summertime lacks the rousing emotional pull of the former and the epic scale of the latter but it remains an engaging celebration of a time when traditional values were under siege and individuals were obliged to decide whether they would stand up and be counted. Francophile audiences should readily embrace a film with a natural nostalgic appeal for an older generation of women and further Festival travels seem assured following its world premiere at Locarno.

Radiant, heartfelt performances from Izia Higelin and Cecile De France make you care about the final outcome even when you feel you know exactly where Summertime might be headed.

There’s a certain predictability in the way Summertime follows young lovers from the initial rush of their attraction to the complications that arise to prevent the affair’s smooth continuation. Corsini veers towards soap-opera twists as a father is silenced by a stroke, placing tremendous burdens on his daughter to sustain the family farm just at the moment she has fallen deeply in love with another woman. The fact that she considers it impossible to live openly as a lesbian within her family and rural community becomes the heart of a tale that may be set some forty years ago but remains immediate and accessible in the depiction of the struggle to be true to yourself.

The film begins in 1971 when country girl Delphine (Izia Higelin) decides to leave her parents farm for the lure of the big city. She is trying to escape the expectation that she will marry and have a family. In Paris she meets Spanish teacher Carole (Cecile De France) and a group of militant activists in the feminist movement. The film is at its most beguiling when it recreates the idealism of the women as they rush along the street pinching men’s bottoms in protest at centuries of sexism, disrupt public meetings and soar on the belief that the time has come to change the world. There is an irresistible energy as the film races along and Corsini makes good use of some unexpected musical choices, including Me And Bobby Magee.

There is a considerable chemistry between Izia Higelin and Cecile De France that makes their passionate romance believable. Once Delphine returns home, Carole follows her to the countryside, befriending her wary mother Monique (Noémie Lvovsky) and trying to understand the compromises required to make their proximity a possibility. The second half of the story is inevitably more bittersweet and measured as some harsh realities set in.

The 1970s setting is more evident in attitude than any conspicuous wallow in retro production design or pop culture references. The balance falls more on the personal than the political although the espousal of traditional family values from the Pompidou government does raise a knowing smile.

The essence of the story remains the relationship between the two women, the clash between urban and rural, the timidity of Delphine and the headstrong conviction of Carole and whether there is enough common ground for the two women to make a future together. The supporting characters are drawn with a degree of sympathy - Delphine’s disapproving mother is far from a monster and her aspiring boyfriend Antoine (Kevin Azais from Les Combattants) is fundamentally decent. Everyone has their reasons for how they act and the radiant, heartfelt performances from Izia Higelin and Cecile De France make you care about the final outcome even when you feel you know exactly where Summertime might be headed.