‘Swimming Out Till The Sea Turns Blue’: Berlin Review 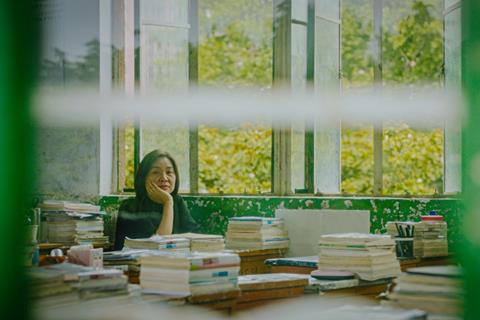 Taking as its jumping off point a literary event in a village in China’s Shanxi Province (the director’s native region), this documentary looks at aspects of Chinese life and history from the perspectives of four writers; one dead and three living. Inspired by his own personal connection with the place of his birth, Jia Zhang-ke explores and amplifies the inspiration that the writers derive from their rural roots using a loose 18 chapter structure. Meditative and meandering, this handsomely shot but unfocused picture might present something of a challenge to all but the most dedicated students of Chinese cultural history.

A central thesis is slow in emerging, and it does feel as though the film might have benefitted from a tighter edit

Intended as the final film in a trilogy of documentaries about artists, Swimming Out Till The Sea Turns Blue follows Dong (2006), about the painter Liu Xiaodong, and Useless (2007), about the fashion designer Ma Ke. It will be most likely to connect with festival audiences and Jia Zhang-ke completists, but even within that demographic, it may have niche appeal.

The community which is hosting the literary event, the Jia Family Village (no connection to the director), was the home of the first of the writers showcased in the film. The late Ma Feng, born in 1922, wrote about rural peasant life; his works included a short story titled Stockman Uncle Zhao, and Sister Han, a novel about a young woman who selflessly volunteers to tend to the pigs rather than go to college. He was also instrumental in mobilising the community to work together to improve the quality of the soil. A portrait of the man is gradually pieced together through the recollections of his now aged contemporaries and his daughter.

Punctuated by quotes, printed on screen, from the showcased writers, the film weaves together observational footage of the locals going about their daily lives, tied into chapter headings like “Eating”, “The Old And The New” and “Journeys”. Tightly focused shots scrutinise the wrinkled skin and gnarled fingers of the elderly for answers. A central thesis, however, is slow in emerging, and it does feel as though the film might have benefitted from a tighter edit.

Three further writers are showcased, from three different generations. Jia Pingwa, born in Shangluo City, Shaanxi Province in 1952, recalls his struggle as the son of a father who was considered to be a counter-revolutionary. Yu Hua, born in Hangzhou, Zhejiang Province, in 1960, talks entertainingly about his journey to writing after having spent five years working as a dentist who considered the inside of people’s mouths “the worst view in the world”. Finally Liang Hong, born in Dengzhou, Henan Province, in 1973, is visibly moved by the memory of watching the decline of her mother’s health. The film then segues into some shots of wheat.

Accompanied by a classical soundtrack which veers between delicate musical motifs from Shostakovich and honkingly unsubtle chunks of Nessun Dorma, the film is an oddly inconsistent experience, one which gives the impression of a work not quite finished.