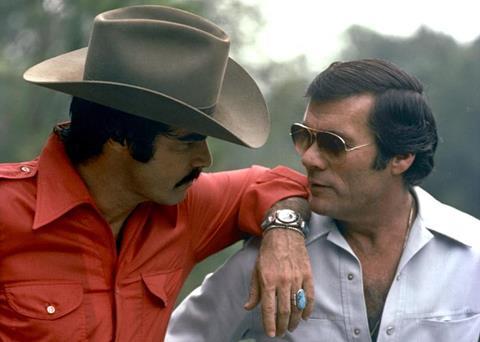 “I used to say to him, if you’d have been born a woman, we’d have had a great marriage.” Burt Reynolds neatly sums up the symbiotic bromance at the heart of this lively documentary. Hal Needham was Reynold’s stunt double, his roommate for eleven years and his director in one of the most successful films of his career, Smokey And The Bandit. And in some ways, both represented something that the other yearned for: Needham craved Reynold’s stardom; and Reynolds, who started out doing his own stunts, was attracted to Needham’s swaggering bravado.

Reynolds ruefully regrets his decision to pose naked on a bearskin as the centrefold in Cosmopolitan magazine, speculating that it may have cost him an Oscar nomination for his work on Deliverance.

The Bandit doesn’t always flow smoothly – it jumps between the biographies and back stories of both men, it crams in talking head interviews and archive footage, before exploring the making of and the iconic impact of Needham’s directorial debut. But it packs a meaty double whammy for anyone interested in mainstream Hollywood in the 1970s and 1980s.

Firstly there’s the insight into Reynolds himself, then the most bankable star in the industry and a man who found it hard to take his own talent seriously. Secondly, and perhaps more interestingly, there is a glimpse into the stunt community in its heyday, before the computer effects wizards took a lot of the danger and, apparently, the fun out of the job. Festival play following on from the film’s premiere at SXSW seems a certainty, and some theatrical and, particularly, television interest should follow. The Bandit should tap into the same market as other docs about the colourful fringes of filmmaking like Electric Boogaloo: The Wild, Untold Story Of Cannon Films.

“They were the men, we were the boys,” says Reynolds of the stuntmen he encountered early in his career. And alpha male outlaw Needham was the coolest of the cool, the defacto leader of a band of hard living hedonists who put their own lives on their line to keep the stars out of danger.

“I think I’m the best Burt Reynolds there is,” smirks the actor during one of his many television chat show appearances. But then we get to know Hal Needham, with his treacly Southern drawl, his shades permanently glued on, shirt gaping open to reveal acres of virile chest thicket, and it becomes clear that Burt Reynolds’ persona owes more than a little to his closest friend. Needham, interviewed in the late 1970s, claims that Reynolds borrowed a lot from him, in particular, his style of dressing. “We once turned up on set wearing exactly the same outfit,” he recalls.

Like Reynolds, director Jesse Moss is clearly fascinated by the extreme lives lead by stuntmen. In 2000, he directed Speedo, a documentary about a stuntman and demolition derby driver. But although the focus of The Bandit is divided more or less equally between Reynolds and Needham, we learn rather more about the former than the latter. Perhaps that’s not surprising. “He made a living falling on his head. Nice guy, not a Rhodes scholar,” says one colleague of Needham.

Reynolds, meanwhile exhibits rather more self-awareness once the film chips away the ‘good ole boy’ veneer. He counts himself as a fan of the ‘effortless’ school of acting, in contrast to what he describes as the ‘constipated’ method favoured by some of his contemporaries, adding, “He gets an Oscar and preparation H, and I get a smile.” It’s fairly clear he’s talking about Marlon Brando at this point. And he ruefully regrets his decision to pose naked on a bearskin as the centrefold in Cosmopolitan magazine, speculating that it may have cost him an Oscar nomination for his work on Deliverance.