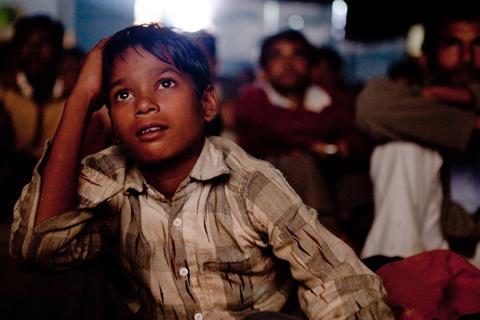 Whatever masterpieces, if any, bow at this year’s Cannes Film Festival, it is likely none will communicate the excitement engendered by movies more headily than The Cinema Travellers. This fast-moving, lyrical documentary tells of the waning days of the tent cinemas that tour around remote villages of western India’s Maharashtra region. It is also an elegiac paean to the showmen who tote their rusted equipment to fairgrounds following the harvest season, and also to the twinkly-eyed septuagenarian projector technician-inventor Prakash, and to the rapt faces of spectators.

A punctuating shot of dawn mist merely says the itinerant exhibitors have been granted another day of poorly paid work.

This evocative first feature collaboration of documentarian Shirley Abraham and photography artist Amit Madheshiya, who are both Indian, is destined to accrue attention on the festival circuit. Though The Cinema Travellers is much more rigorous, aesthetically and intellectually, than the majority of well-heeled exotic travelogues, commercial success may be limited by its slightly buried narrative.

Bowing as an official selection in the Cannes Classics section, this evocative first feature collaboration of documentarian Shirley Abraham and photography artist Amit Madheshiya, who are both Indian, is destined to accrue attention the festival circuit. Though The Cinema Travellers is much more rigorous, aesthetically and intellectually, than the majority of well-heeled exotic travelogues, commercial success may be limited by its slightly buried narrative.

The film was inspired by Madheshiya’s award-winning 2010 photo show that grew from his and Abraham’s academic research into alternative Indian film exhibition. Significantly, they haven’t given themselves writers’ credits, suggesting the movie was discovered in production more than written or blueprinted over the course of its five-year gestation.

More through montages than linear storytelling, however, an ominous story does emerge from the unending crises brought on Sumedh Touring Pictures and Akshay Touring Pictures by late-arriving film reels, bad weather, defective equipment, decaying nitrate film, rivalry, a burning tent in one case, and inroads into attendances made by increasingly-available cable and digital television and bootlegged discs.

The two outfits are radically different. One is run by a tough, business-minded former snack-seller who propels his sizeable crew from one post-harvest jatra (or religious fair) to another in a dodgy open-topped truck – chickens skitter out of its way – and who frets about declining ticket sales.

The other company consists of the boss (older and more laconic than the first proprietor) and his helper who, in a haunting sequence, locate their decrepit, overgrown truck-cum-projection booth in a jungle clearing. Travelling cinemas peaked seventy-odd years ago and this one looks like it’s been lost half that time. Its discovery is akin to stationmaster Will Hay finding hens nesting in the furnace of an ancient steam loco in 1937’s Oh, Mr. Porter!, or the rescuing of Chitty Chitty Bang Bang in the 1968 musical.

Akshay’s and Sumedh’s vintage projectors – sometimes cobwebbed, over-oiled, or snagged with broken celluloid – are among the film’s stars: cantankerous, juddering sources of enchantment which, when functioning, deliver experiences that are near-sacred judging by the patrons’ expressions at the start of the show that concludes the pell-mell opening passage. They seem oblivious to the mud and stones they sit on beneath the big tops as they feast on old mythological adventures, Bollywood fare, and chop-socky actioners.

There are so many shots of the tent cinema projectors and their innards that they recall Peter Strickland’s playful fetishising of the analogue studio equipment in 2012’s Berberian Sound Studio. Madheshiya and Abraham probably had visual preservation in mind, for who knows where the touring picture companies’ gear will end up once their race is run?

There are better-maintained magic machines in the Aladdin’s Cave that is Prakash’s narrow workshop. A modest, wiry old man with a gentle smile, he recalls that he was an adolescent in the mid-1950s when he first visited a cinema. Whereas his friends lost themselves in the movies, he wondered how they were made. “The seed is sown, it will sprout now, “ he says, recalling how cinema found him and launched his career as a widely travelled technician. He is a fount of epigrams: “Work is its own guru,” “Life inspires the creation of machines,” and, thinking of the oil-bath projector he invented, “My name means light”. He is the jewel in The Cinema Travellers’ crown.

Madheshiya, responsible for the cinematography, has an eye for atmospheric long shots – an image of a cinema tent juxtaposed to two Ferris wheels elegantly weds old amusements that have stuck around for years. A punctuating shot of dawn mist merely says the itinerant exhibitors have been granted another day of poorly paid work. The melodic score is sometimes plaintive, sometimes achy, thanks to a scraping violin. It helps give the film the quality of a requiem.