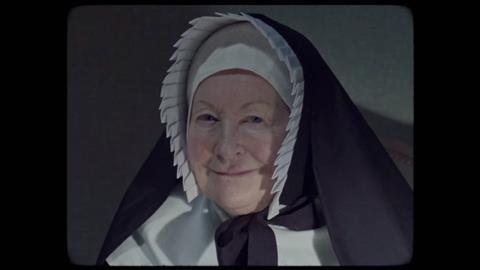 Debut director Aislinn Clarke runs headlong into the found footage genre with The Devil’s Doorway, and emerges with a stylish, shuddering horror set in a Magdalene Laundry in Ireland in the 1960s. With echoes of the Tuam Babies whispering down the convent corridors, this low-budget thriller is creatively shot on 16mm in a boxy, faded format which benefits greatly from a big-screen view and goes out through IFC Midnight in the US on select theatrical/on demand mid-July. Two strong leads, the doubting priest Lalor Roddy and the Nurse Ratchet-like Mother Superior played with gusto by Helena Bereen, help distinguish this Exorcist update and mark Clarke as a talent to watch.

The Devil’s Doorway takes the art of the hand-held camera to rushing extremes.

Novice Clarke works within strict genre conventions – and clear budget limitations – to put her visual signature on this Kew Media-backed project, but The Devil’s Doorway also intelligently tackles themes which continue to haunt Ireland today. Setting her film in 1960 takes the viewer back into the heights of the abuse which went on at the Magdalene laundries and finds everyone guilty – as hell. Arriving months before the latest Conjuring iteration, The Nun, Clarke’s drama is unburdened with commercial expectations and certainly delivers some sinister sisters. Audiences in Ireland may respond.

Vatican investigator Father Thomas Riley (Lalor) and his assistant Father John (Ciaran Flynn) are sent by the Vatican to investigate “a miracle” in this isolated convent, a home for “fallen women” where the wind howls and the inmates sweat in the giant basement laundry. Father John is shakily recording the events which transpire for presentation to the religious authorities. Statues of the Virgin Mary which are liberally dotted around the convent’s corridors have been crying tears of blood, but Father Thomas lives up to his doubting namesake.

All clues lead to a heavily pregnant, unmarried 16 year-old girl (Lauren Coe) who has been locked up in the basement, and appears to be possessed. The secrets here, however, run darker and much, much deeper.

In the wake of the abortion referendum in Ireland and the issues it unearthed, Clarke’s film is timely. It takes its narrative cue from the Bon Secours mother-and-baby home in Tuam, County Galway in which “significant” numbers of dead children have been discovered. Even though this is placed within a potentially-exploitative genre framework, it is still handled with sensitivity and sympathy by this latest female director to flesh out horror tropes.

The Devil’s Doorway takes the art of the hand-held camera to rushing extremes. While Ryan Kernahan’s lens is dashing up and down the same set of corridors with gusto, Clarke isn’t afraid to cut this sinister urgency with long shots of a tape recorder whirring, for example. She certainly knows not to outstay her welcome, and the film clips out at 73 minutes. There’s room of a sequel, of course, and while we’ll certainly be seeing more evil nuns this year, we should also be expecting to see more from Aislinn Clarke.