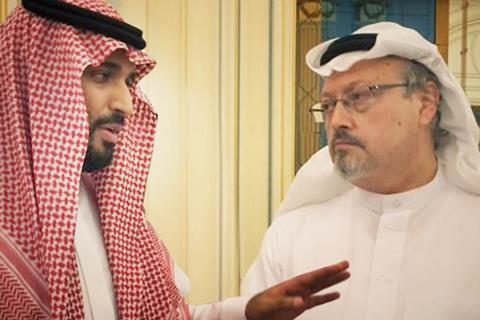 A solidly researched and vigorous investigative documentary into the murder of Saudi-born Washington Post journalist Jamal Khashoggi, The Dissident holds few new revelations but presents its case with enough infuriating evidence and storytelling power to make it worthwhile. Director Bryan Fogel, who won the Academy Award for Icarus, his more entertaining exposé about Russia’s Olympic doping scandal, is on more conventional terrain here. Taking viewers methodically through various strands related to the Khashoggi killing, the documentary carefully builds over its two-hour running time—though never feels slow—and should find a welcome home at both festivals and streaming platforms globally.

The Dissident skilfully interweaves several different storylines, which all eventually coalesce. First, we are introduced to Saudi Arabian political activist Omar Abdulaziz, who lives in Montreal, fears for his life, and mounts anti-Saudi message campaigns on the Internet. Then there’s the actual events of the killing of Khashoggi at the Saudi embassy in Turkey. And lastly, there’s the necessary context and background to understand who Khashoggi was, his work and personal life, the history of the Saudi government and the rise to power of the current ruling Crown Prince Mohammed bin Salman (a.k.a. MBS) — who, by all accounts, sanctioned the assassination.

It’s a lot of information to absorb but the film never takes its audience’s intelligence for granted, always moving along at a purposeful pace. And with its near-constant suspenseful musical score, The Dissident aims to pull together what politically-savvy audiences have only read about into a propulsive cinematic thriller. There are compelling sound and visual materials, whether audio recordings taken by Abdulaziz of Saudi officials trying to compel him to return to the country, or videotapes provided by Turkish surveillance cameras that show the incidents that occurred before and after the murder.

In fact, the Turkish police and security services come off like unsung heroes, providing evidence to the United Nations and maintaining pressure on the Saudis. The film also effectively conveys the tragic irony of why Khashoggi was visiting the embassy in the first place—to get the necessary documents to be able to marry his fiancé, Hatice Cengiz, who appears in the film, providing a more human dimension to the tragedy.

Some visual devices are less successful. There are simply too many shots of Abdulaziz, walking alone on the snowy streets of Montreal, as we hear his voice over. There’s also a dazzling digitally animated sequence that envisions Saudi Arabia’s propagandistic Twitter army—known as “the flies”—as actual flies infiltrating the Twitterverse, which feels a bit overdone. But as with Icarus, Fogel enjoys employing the occasional visual analogy to get his point across. (Alas, unlike Icarus, there’s no character as goofily compelling as that film’s central protagonist, Russian whistleblower, Grigory Rodchenkov.)

The Dissident’s most forceful and shocking moments are undoubtedly the gruesome details of the killing—right down to transcripts from inside the Saudi embassy, where the Consul General and his henchmen speak just 15 minutes before Khashoggi’s arrival about how his body will fit in a bag, and what body parts will be difficult to dismember. There’s also the fascinating revelations about Saudi Arabia’s online hacking—including their targeting of Amazon founder and Washington Post owner Jeff Bezos, which was just recently made public—and the lesser-known story of Khashoggi’s funding of the ‘bee movement’ of online anti-MBS activists, of which Abdulaziz was the leading member.

It’s this final incident that provides another intriguing arc for The Dissident, and the meaning behind the film’s title. Initially, we’re told that Khashoggi was, in fact, not a dissident, at all, but a reformer—a man who had been an insider and loyal citizen of his country. But as the film progresses and MBS’s actions showed him to be more autocratic, Fogel and Abdulaziz suggest that Khashoggi’s move from journalist to political activist lead him to be the dissident of the title—and then, tragically, the martyr for freedom that he would eventually become.