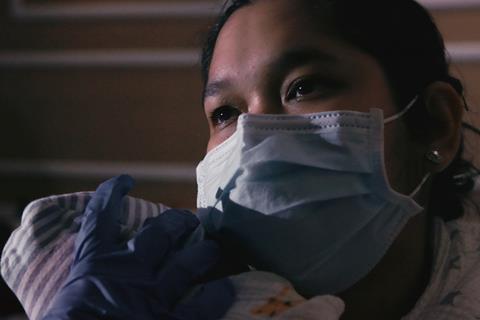 The prospect of revisiting the early days of the Covid-19 pandemic may not sound hugely enticing, but The First Wave is so emotionally charged and involving that it overcomes any initial reservations. The latest work from director Matthew Heineman (Cartel Land, City Of Ghosts) captures the experiences of those on the front line of New York’s response to the health crisis. It is a valuable record of a moment in time but also an unflinching remembrance of lives lost, the selfless commitment of healthcare professionals and the search for hope in a time of despair. Dogwoof will release in the UK on November 26 following festival screenings at Busan and London.

Heineman begins in March 2020 as New York was registering its first Covid cases. His base is the Long Island Jewish (LIJ) Medical Center in Queens. The focus is on staff and patients as they are hit by the first wave of infections. A seriously ill man summons his fading energy to speak by telephone to loved ones. Within minutes he is dead. A moment’s silence is observed and then the staff go back to work. His passing is the first of the hundreds and thousands that are to follow.

The film makes no mention of the risk that Heineman and his team must have faced, but it becomes apparent as they operate cameras right in the middle of hospital wards and emergency situations. There is something of the style of Frederick Wiseman in a film that observes an institution at work and the people who are essential to its operation. The key to documenting what happened lies in concentrating on the individual human stories of hospital staff, including internist Dr. Nathalie Douge and physical therapist Karl Arabian, and patients like school safety officer Ahmed Ellis and Brussels Jabon, a nurse who has been hospitalised.

The passing weeks and the long, slow journey from severe illness to potential recovery provide the structure of the film. We come to see that there is little predictable about who survives. There is also a potent sense of the way staff invest in the recovery of individual patients as some small reassurance that their work has been of value and that there will be a world beyond the pandemic.

The First Wave intersperses the hospital dramas with views of New York in the spring and summer of 2020. The Big Apple becomes a ghost town with eerily deserted streets as The City That Never Sleeps retreats into hibernation. A lone cyclist on the road or a solitary walker on the street brings home how much has changed. The soundtrack adds a vital element to conveying an unprecedented situation. We hear none of the traditional sounds of the city, just the scream of ambulance sirens, the beep of life-support machines, a gasping for one more breath and the sobbing anguish of grieving relatives.

Heineman expands the focus from individuals in crisis to capture elements of the daily briefings from New York Mayor Andrew Cuomo, who was then riding high from his response to the pandemic. We can only assume that the lack of any mention of then-President Donald Trump is intentional. The death of George Floyd and the Black Lives Matter movement attract the support of Douge for whom “racism is a public health issue” as she watches Hispanic and African-American communities disproportionately hit by Covid.

The First Wave is a film that acknowledges the bigger issues and wider truths of the pandemic, especially in the inequalities it exposes and reinforces. The heart of the film remains the intimate stories of families, love, loss and the tireless, careworn professionals giving dignity to the dying and hope to those reaching for recovery one day at a time. The emotional toll on those dealing with death on a daily basis is extraordinary.

It may feel too soon to look back on a pandemic that is far from over, but The First Wave is a powerful testimony to what happened in its initial phase in a city that became the epicentre of America’s battle with Covid.  It is impossible not to feel intensely involved in the fate of Ellis or Jabon, as well as all of those striving to ensure that “one day this will end”. This is an often upsetting film that will leave most viewers in a puddle of spent emotion, which makes the closing-credits song ’Breathe’ by Jon Batiste feel like a step too far.